LITTLE COLORADO RIVER, Arizona— At first, he was asking Jesus to help him. Toward the end, he was thanking the Discovery Channel.

Greeted by wild cheers, US daredevil Nik Wallenda became the first man to cross a Grand Canyon-area gorge on a tightrope Sunday, completing his latest record-breaking feat in under 23 minutes.

The 34-year-old, who walked across the Niagara Falls last year, prayed constantly as he crossed a tributary gorge of the US landmark without a safety net or harness on a quarter-mile-long high wire some 1,500 feet (457 meters) above the Little Colorado River.

Wind gusts were higher than expected, and he twice crouched down on the wire. “Those winds (were) so unpredictable … just out of the blue there would be a 35 miles (56 kilometers) an hour gust,” he said.

“My arms are aching like you couldn’t believe,” he added, hugging his wife and children after the nerve-wracking walk—without a harness—over the stunning gorge in eastern Arizona, broadcast live around the world.

Hundreds of people watched from the remote site on the Navajo Nation in northeastern Arizona that led them past roadside vendors selling traditional jewelry and about a dozen protesters who consider the area sacred.

Organizers said he took 22 minutes and 54 seconds to cross the 1,400 feet (426 meters)—faster than anticipated—giving a thumbs up and half-running the last several yards to reach the other side.

Wallenda’s feat made it into the top 10 global topics on Twitter, with organizers saying there were some 700,000 tweets during the walk alone. 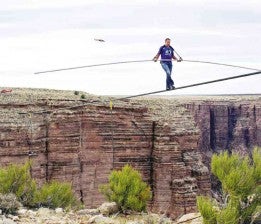 TIGHTROPE ACT Aerialist Nik Wallenda nears the end of his quarter-mile walk on Sunday over the Little Colorado River Gorge in northeastern Arizona. The daredevil traversed the tightrope strung 1,500 feet above the chasm near the Grand Canyon in just over 22 minutes, pausing and crouching twice to duck whipping winds that swayed the cable. AP

There was some debate over whether the walk was over the Grand Canyon itself—technically it was over a tributary gorge in the Navajo Nation, east of the main part of the world-renowned landmark.

But organizers insisted he had walked across the Grand Canyon, and many who watched the death-defying stunt were willing to forgive any over-zealous marketing hype.

Wallenda has been planning the walk for about four years, homing in on a remote location at the eastern end of the mighty geological chasm, on land operated by Navajo Nation Parks and Recreation.

He had hoped to be able to take questions from journalists live while on the high wire, but it became clear within a few minutes of the start that he needed all his concentration for the walk.

“Praise God, this is awesome …Thank you Jesus for this beautiful view,” he said. “Winds are way worse than I expected,” he added at one point, in comments broadcast live by the Discovery Channel in more than 200 countries around the world.

His father was in constant live radio link with him, although for the first five minutes the conversation consisted largely of Wallenda asking Jesus and God to help him and to calm the winds.

He first crouched down before the half-way point, explaining afterwards he needed to stabilize the cable, and himself. “The winds were getting really gusty right then,” he said.

“It was just getting really, really uncomfortable,” he added.

“It was strenuous the whole way across. It was a battle. The winds were strong, they were gusty,” he told reporters. “But there was never a point where I thought, ‘oh my gosh, I’m going to fall.'”

Wallenda stepped slowly and steady throughout, murmuring prayers to Jesus almost constantly along the way. He jogged and hopped the last few steps.

“Thank you Lord. Thank you for calming that cable, God,” he said about 13 minutes into the walk.

Wallenda was rigged up with a microphone and live cameras, including one on his chest looking straight downwards to the Canyon floor below—a distance more than the height of the Empire State Building. 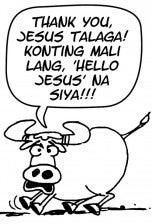 As he passed the half-way point he continued to pray—but as he neared the other side, the tension lifted palpably, notably when, instead of thanking God and Jesus, he said: “Thank you Discovery Channel for believing in me.”

After fast-walking the last several meters he fell into the arms of his wife, Erendira, and his three children. “It’s so important to have my family there. I wouldn’t be doing this if it wasn’t for their support,” he said.

Wallenda, who has talked about Egypt’s pyramids and the Eiffel Tower in Paris as possible venues for a future stunt, said after Sunday’s walk he would likely stay closer to home.

“My dream for my next stunt is to walk between two skyscrapers in New York City,” said the daredevil, who also paid tribute to his great-grandfather Karl, who died in 1978 after falling from a wire between two buildings in Puerto Rico.

The 34-year-old Florida resident is a seventh-generation high-wire artist and is part of the famous “Flying Wallendas” circus family—a clan that is no stranger to death-defying feats.

Several other family members, including a cousin and an uncle, have perished while performing wire walking stunts.

Empire State is next

Nik Wallenda grew up performing with his family and dreamed of crossing the Grand Canyon since he was a teenager. Sunday’s stunt comes a year after he traversed Niagara Falls earning a seventh Guinness world record.

About 600 spectators watching on a large video screen on site cheered him on as he walked toward them. A Navajo Nation ranger, a paramedic and two members of a film crew were stationed on the canyon floor.

The ranger, Elmer Phillips, got a little nervous when Wallenda stopped the first time. “Other than that, a pretty amazing feat,” Phillips said.

Wallenda already is eyeing his next stunt, which he hopes will take him between the Chrysler and Empire State buildings in New York. As a nod to his Internet audience, he said he also would ask his Facebook and Twitter followers what the next challenge should be

But he said he would give up tightrope walking altogether if his wife and children ever asked him.

“That’s a serious talk that we’ll have. But absolutely, it weighs on heavy on me,” he said.