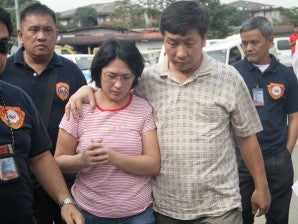 MANILA, Philippines — After spending eight months in detention, the woman accused of beating her maid until the house helper became blind and illegally detaining her for three years has offered to plead guilty to a lesser offense.

During Monday’s hearing before Judge Germano Francisco Legaspi of Quezon City Regional Trial Court Branch 77, Annaliza Marzan, through her lawyer Joel Ferrer, offered to plead guilty to committing article 274 of the Revised Penal Code (RPC), or enforcing the payment of a debt by compelling the debtor to work, against his or her will, as a household servant or farm worker.

Marzan and her husband, Reynold, are charged in court with serious illegal detention for allegedly detaining from 2009 to 2012 Bonita Baran, then their maid, inside their house at Las Villas del Cielo along Visayas Avenue and beating her.

The offer to plead guilty to a lesser offense is part of plea bargaining during the pretrial proceedings after Baran submitted in March a supplemental sworn statement, along with the prosecution panel’s pretrial brief, where she asked for over P1.9 million in damages from the couple allegedly responsible for her blindness.

In Monday’s hearing, Ferrer said that Annaliza Marzan is willing to plead guilty to committing RPC Article 274 which is punishable with arresto mayor in its maximum period or four months and a day to six months.

Under the provision, the penalty of arresto mayor in its maximum period to prision correccional in its minimum period (six months and a day to two years and four months) is imposed on any person “who, in order to require or enforce the payment of a debt, shall compel the debtor to work for him, against his will, as household servant or farm laborer.”

Ferrer said that the elements of the crime for which Marzan was charged are necessarily included in committing article 274 of the RPC. Serious illegal detention, under article 267 of the RPC, is punishable with reclusion perpetua or at least 30 years of imprisonment.

While the prosecution panel said that it was not previously aware of the offer, assistant city prosecutor Irene Resurreccion agreed to a meeting between Baran and the Marzan couple where the offer could be discussed in detail. Judge Legaspi rescheduled the pretrial hearing on July 29 to allow the parties’ plea bargaining.

Apart from the criminal aspect of the charge, the parties are currently in talks over its civil aspect following Baran’s claim of entitlement to over P1.9 million of damages.

In her supplemental sworn statement, which paved the way for the plea bargaining, Baran claimed that she had lost all chances of being hired as a housemaid, along with her eyesight, after her ordeal at the hands of the Marzan couple.

She said that she has lost P1.179 million of earnings as a house helper as a result of her blindness and sought P400,000 as moral damages and another P400,000 by way of exemplary damages intended to discourage others from emulating the couple’s alleged crime.

Baran further said, addressing Judge Legaspi, “I want the court to know that no amount of money can compensate the suffering and anguish in my heart and mind. My blindness is something that I and my family will carry all our lives.”