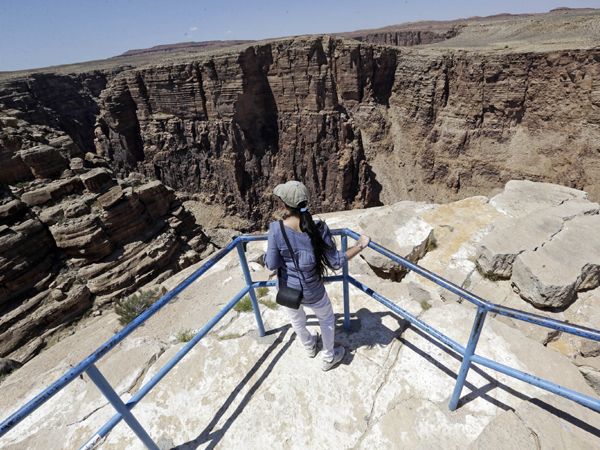 A unidentified tourist looks from a view point along the Little Colorado River Gorge Saturday, June 22, 2013, on the Navajo reservation near Cameron, Ariz., outside the boundaries of Grand Canyon National Park, near where Nik Wallenda, the Florida-based daredevil, will bid to walk on a tightrope stretched across the Little Colorado River Gorge. The event, which will be broadcast on live television at 8 p.m. EDT on Sunday with a 10 second delay. Wallenda will walk a third of a mile across a wire suspended 1,500 feet above the river. (In comparison, the Empire State Building in New York City is 1,454 feet high). AP Photo/Rick Bowmer

Wallenda performed the stunt on a 2-inch (50-millimeter)-thick steel cable, 1,500 feet (457 meters) above the river on the Navajo Nation near the Grand Canyon. He wasn’t wearing a harness.

Wallenda took just more than 22 minutes, pausing and kneeling twice to get “the rhythm out of the rope” and murmuring prayers to Jesus almost constantly along the way. His stepped slow and steady, but jogged and hopped the last few steps.

The event was broadcast live on the Discovery Channel.

The 34-year-old Wallenda is a seventh-generation high-wire artist and is part of the famous “Flying Wallendas” circus family — a clan that is no stranger to death-defying feats.

His great-grandfather, Karl Wallenda, fell during a performance in Puerto Rico and died at the age of 73. Several other family members, including a cousin and an uncle, have perished while performing wire walking stunts.

Nik Wallenda grew up performing with his family and has dreamed of crossing the Grand Canyon since he was a teenager.

Wallenda wore a microphone and two cameras, one looking down on the dry Little Colorado River bed and one facing straight ahead. His leather shoes with an elk-skin sole helped him keep a grip on the steel cable as he moved across.