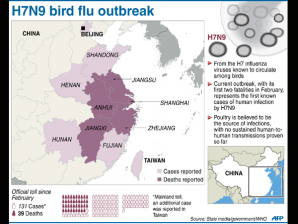 Graphic showing the official toll of the H7N9 bird flu outbreak in mainland China where a total of 131 human cases have been confirmed with 39 people dying from the disease. AFP FILE

PARIS – The H7N9 bird flu that hit China this year killed over a third of hospitalized patients, said researchers Monday who labelled the virus “less serious” but probably more widespread than previously thought.

They warned watchdogs not to take comfort from a lull in new infections, as the virus may reappear in the autumn.

In what they described as the most complete picture of the virus’ severity, researchers in Beijing and Hong Kong found that H7N9 proved fatal in 36 percent of patients admitted to hospital in mainland China.

This was a lower fatality rate than H5N1-type bird flu which emerged in 2003 and killed about 60 percent of hospitalised patients.

It was higher, though, than the H1N1 “swine flu” outbreak of 2009-10, which had a 21-percent death rate among people requiring hospitalisation.

started in February, the National Health and Family Planning Commission said in its last monthly update.

One other case was recorded in Taiwan.

The virus is believed to spread to humans from birds. The fear is that it could mutate into a form transmissible from human to human.

Writing in The Lancet medical journal, the researchers estimated that between 0.16 percent and 2.8 percent of all people infected with H7N9, and who displayed symptoms of flu, were at statistical risk of dying.

“Human infections with avian influenza A H7N9 virus seem to be less serious than has been previously reported,” they wrote.

But many mild, unreported cases may have occurred— between 1,500 and 27,000— said the study, urging “continued vigilance and sustained intensive control efforts”.

In a separate paper also published by The Lancet, the researchers said there was a possibility H7N9 could rebound within months.

“The warm season has now begun in China, and only one new laboratory-confirmed case of H7N9 in human beings has been identified since May 8, 2013. If H7N9 follows a similar pattern to H5N1, the epidemic could reappear in the autumn,” they wrote.

“This potential lull should be an opportunity for discussion of definitive preventive public health measures, optimization of clinical management, and capacity building in the region in view of the possibility that H7N9 could spread beyond China’s borders.”

The team also estimated the virus’ incubation period— the time between infection and the onset of symptoms— at about three days, shorter than previous estimates.

Last month, a study in The Lancet said laboratory tests had revealed resistance in some H7N9 patients to the only available treatment.

And the results of a lab study published in the US journal Science showed the H7N9 strain can spread among mammals, specifically ferrets, and could do the same between humans under certain conditions.

H7 influenza viruses comprise a group that normally circulate among birds, of which H7N9 forms a subgroup that had never been found in humans until the Chinese outbreak.

In a comment on the studies, The Lancet said that while the number of new cases had stalled, probably in response to authorities closing live bird markets, the threat persisted.

“Continued monitoring of infections, together with near-real-time estimation of case fatality risk and serological surveys, remains crucial,” it said.