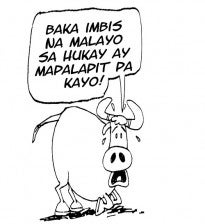 This stem cell therapy could be hazardous to your health.

The Philippine Medical Association (PMA) on Sunday warned Filipinos against availing themselves of the so-called “xenogenic” stem cell therapy from foreign doctors who fly into the country and perform the procedure in five-star hotels in Metro Manila.

The doctors’ organization also announced that it had already tapped the help of the National Bureau of Investigation and the Philippine National Police to look into the scam, which it said tainted the legitimate practice of stem cell or regenerative medicine in the country.

Dr. Leo Olarte, PMA president and spokesperson of the Philippine Society for Stem Cell Medicine (PSSCM), disclosed that the two medical groups had received complaints from patients and their relatives who had undergone such stem cell procedures allegedly performed in the country by German doctors.

Based on the complaints, Olarte said the patients were asked to check in at a five-star hotel in the capital, where they were injected with animal-based stem cells at around P1 million per shot.

“These foreigners are not even licensed to practice medicine in the country and are in violation of the Medical Act of 1959,” Olarte stressed. “We are then asking government regulators and enforcers, especially the NBI and the PNP, to investigate these criminal acts.”

He warned Filipino doctors to stop collaborating with unscrupulous foreign counterparts or the organization would file criminal cases against them.

“If you will continue doing this, we will file criminal cases against you,” said Olarte, an orthopedic surgeon and practicing lawyer.

The doctor also stressed that the autologous adult stem cell treatment—derived from the patient’s own blood, bone marrow or fat—was the only approved stem cell therapy by the Department of Health (DOH) because it had already been proven as the safest procedure available worldwide.

He discouraged Filipinos from considering xenogenic stem cell sources or those derived from animals and plants, as well as allogeneic sources or from other human beings, due to the many instances of deadly complications from these procedures.

“Any other source outside the patient’s own body can result in death due to severe complications, specifically graft versus host reaction, immediate or delayed hypersensitivity reaction and severe infections,” Olarte said.

He added that the PMA had been silently looking into the deaths of some Filipino politicians due to complications of stem cell therapy sourced from sheep. But he did not identify them.

“We are appealing to our people who fell victim to this modus operandi to go to our PMA office in Quezon City and file the necessary complaint so that together we can correct these injustices to you or your relatives,” Olarte said.

He said the PMA and the PSSCM had been working closely with the DOH and the Professional Regulation Commission’s Board of Medicine so that the practice of stem cell therapy in the country would be regulated to protect Filipino patients from unscrupulous practices.