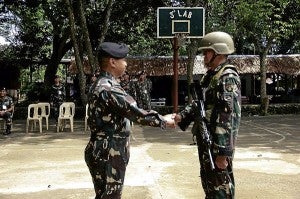 THE MILITARY maintains a heavy presence in Basilan, where the bandit group Abu Sayyaf is known to operate. FILE PHOTO

Colonel Jose Johriel Cenabre, commander of the Joint Task Force Sulu, said the sisters Nadjova and Linda Abdelbasit were snatched at 9 a.m. while traveling in a passenger jeep in Barangay (village) Liang in Patikul town.

Cenabre said witnesses identified at least two of the kidnappers. They were Aljini Mundo alias Ninok Sapari and Bensaudi Mundoc, who alledgedly belonged to the “Lucky Nine” group of the Abu Sayyaf.

“The victims … were on board a passenger jeep enroute to Jolo and they came from Tambang village in Patikul. However upon reaching Sitio Baunoh in Liang barangay around 10 armed Abu Sayyaf Group members identified with the Lucky Nine forcibly took them,” Cenabre said.

He said the bandits fled with the victims toward Sitio (sub-village) Kanjimaw, which is still part of Patikul.

But Abraham Idjirani, spokesperson of Jamalul Kiram III, who claims the title of Sulu sultan, said they had no knowledge of the visit of the sisters to Sulu.