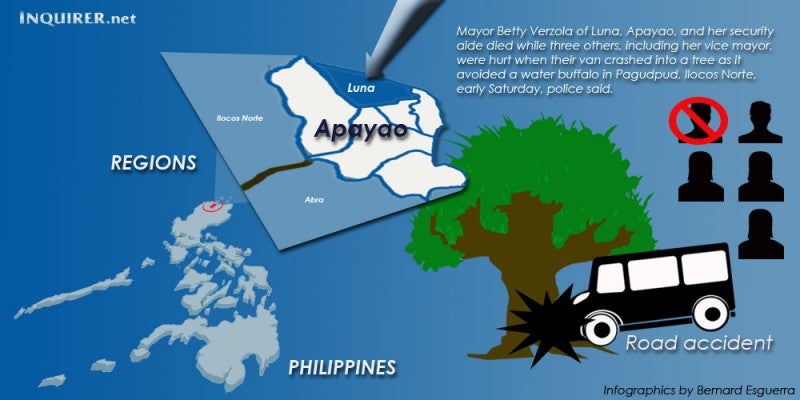 LAOAG CITY, Philippines—Mayor Betty Verzola of Luna, Apayao, and her security aide died while three others, including her vice mayor, were hurt when their van crashed into a tree as it avoided a water buffalo in Pagudpud, Ilocos Norte, early Saturday, police said.

Inspector Swerte Ubungen, deputy police chief of Pagudpud, said the van’s driver, Jun Ildefonso, avoided hitting a carabao on the Barangay Pasaleng section of the highway, causing him to lose control of the wheel. Verzola’s group came from a conference in Baguio City and was on its way home to Apayao when the accident happened at 1:20 a.m.

Police said Verzola, 62, died while being taken to the Bangui District Hospital. Her security aide, Marlon Taclibon, also died in the accident.

Vice Mayor Josephine Bangsil, Lilibeth Agustin and Ildefonso were injured and taken to a hospital in Batac City.