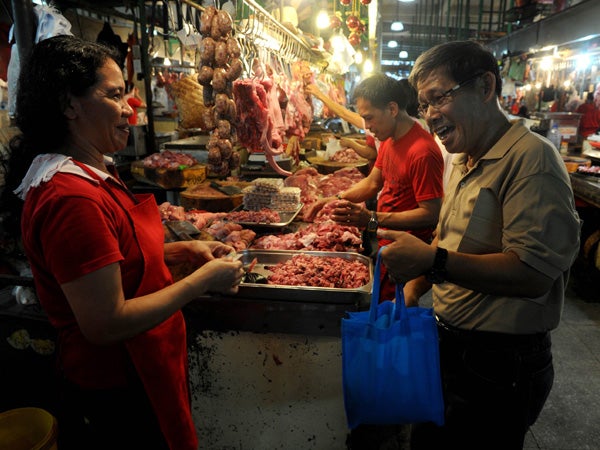 After a widespread publicity campaign leading up to the ban, Makati city environment protection officers began handing out fines of 5,000 pesos ($115) to shops and supermarkets caught distributing the items.

“We have already seen a lot of cases. We have issued a lot of tickets,” one of the environment officers, Danny Villas, told AFP.

While Makati, one of 17 cities or districts that make up Metro Manila, still allows food to be wrapped in plastic, it has banned the bags that shops and restaurants traditionally issue for free.

Consumers are given the option of paper alternatives or not using any bags, with supermarkets encouraging shoppers to bring their own.

Team leader Xenelit Camarce, who was inspecting a public market, said there had been strong resistance to the ban, particularly among the poor.

“A lot of people, especially those sidewalk vendors, they are still using it. But the ones really complaining are the customers, those buying fish and chicken. They get angry when they are accosted,” she said.

Makati is home to many of the country’s foreign embassies, biggest corporations and banks, swankiest shopping malls and about 2,900 restaurants.

Although its official population is just over 600,000, this swells to about 3.7 million in the daytime when thousands of commuters travel to the area to work, city officials said.

Makati became the ninth out of the 17 areas to issue the plastics ban, meaning 6.7 million of Metro Manila’s population of 13 million people are covered by the restrictions.

Prexy Macana, project officer of Makati’s environmental services department, said cutting down on plastic was vital to stop the clogging of the city’s waterways, which is widely blamed for contributing to floods.

“During our bi-monthly wastewater clean-ups, we found most of the garbage is plastics,” she said.

June is the start of the rainy season in the Philippines, and Metro Manila has already endured heavy flooding, although none deadly.

The worst floods to hit the capital in recent years occurred in 2009, when Tropical Storm Ketsana submerged more than 80 percent of the city and claimed about 400 lives.

Another 100 people died in August last year when heavy lashed the city for more than a week.