Gov’t to fix flooding in Metro by yearend | Inquirer News

Gov’t to fix flooding in Metro by yearend 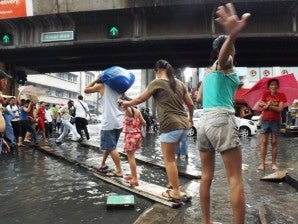 Singson and Tolentino were the focus of criticism in the media for Monday’s miseries triggered by monsoon downpours at the outset of the rainy season—the kind that confronted President Benigno Aquino III even before he had warmed his seat in Malacañang at the start of his “daang matuwid” administration three years ago and led to the sacking of the weather bureau chief.

Recognizing that the flood control master plan would take some time—full completion won’t be achieved until 2035, or after the terms of four Presidents—Singson and Tolentino asked the indulgence of the public whose patience was wearing thin.

“Until December of this year,” said Singson of the Department of Public Works and Highways (DPWH) target date for completing at least 70 of the 90 ongoing drainage improvement projects, road-elevation projects and clearing of the eight major waterways in Metro Manila of both obstruction and squatters.

Singson did not reveal the progress of each of the 11 projects under the P352-billion flood control master plan that the DPWH announced in August last year and started this year.

He said “not all could be completed soon,” pointing out that the problems were a result of decades of neglect.

“The funding is not an issue. We just need time to be able to implement all of these major projects that we are undertaking,” he said.

According to Singson, the master plan covers 4,354 square kilometers in parts of Metro Manila, Bulacan, Laguna, Rizal and Quezon province.

The short-term solution is addressing the waterways’ capacity to allow the unimpeded flow of drainage and floodwater to Manila Bay and Pasig River.

Part of the “immediate high impact” projects are the watershed management and dam construction in Marikina, Singson said. This will take some time to develop, he said.

When all these waterways are cleared of obstructions, the rainwater falling on Metro Manila will easily find its way into Manila Bay and Pasig River, Singson said.

“Comparing it to a human heart, the (arteries are) blocked and the flow of blood is impeded—so the person will experience a heart attack,” Singson said.

The MMDA, for its part, has been given funds to upgrade 12 pumping stations in Metro Manila, but Tolentino said constructing or installing each of these stations will take 200 days.

To end perennial flooding in the capital, Manila, especially along España Avenue, the DPWH is slated to build a 2.6-kilometer Blumentritt box culvert or “water tunnel” that will run from Dapitan to Tondo.

Singson said the tunnel (3.6 meters in width and 2.7 m in depth) would take 12 months to construct. He did not reveal the project’s price tag.

But Singson pleaded with the public not to pin the blame on the DPWH for the perennial flooding on España.

He said this “isolated flooding should not be blamed on us” because “every year, that area is being flooded. We all know that when it rains, España is flooded, and there are several other places in Metro Manila in a similar situation.”

He cited, for example, Maysilo in Mandaluyong City, España-Araneta Avenue area and Tatalon in Quezon City.

“These (flood-prone) areas are not new. So there are solutions being done,” he said.

“And, precisely, this master plan was designed to address and come up with a permanent long-term solution—not the (piecemeal approach) every year as if we never learn,” Singson said.

Explaining the enormity of the flood problem, Singson said that rainfall from the Sierra Madre mountains, Montalban and San Mateo in Rizal province—“because we don’t have  a watershed anymore that will retain that water”—goes to upper Marikina River “all at the same time.”

Since the Marikina River is already silted—it has a diminished water-carrying capacity—it tends to overflow during heavy rains and the water goes to lower portions of Cainta, Rizal and Laguna Lake, plus low-lying areas in upper Marikina.

Besides the water-carrying capacity of Metro Manila, the master plan will address the plight of low-lying communities in Camanava (Caloocan, Malabon, Navotas and Valenzuela) area, Obando and Meycauayan in Bulacan, and all of the lakeshore towns around Laguna Lake by the construction of dikes.