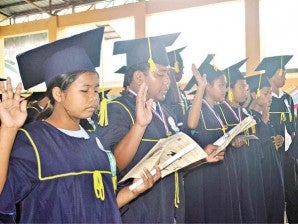 THE LATEST batch of graduates from the “Sentrong Paaralan ng mga Agta,” an alternative learning school for young Agta tribesmen in the Sierra Madre. COURTESY OF TRIBAL CENTER FOR DEVELOPMENT

Adopt a college scholar among the youths of the Agta in the Sierra Madre mountains and help secure the future of the whole indigenous people.

“We appeal to the generosity of lowlanders, government officials and nongovernment organizations to help us in providing college education for our youth. In doing so, we are assured of a bright future for our tribe,” Agta governor Ramcy Astoveza said in an interview recently.

Fourteen Agta youths are currently enrolled in a university in Infanta, Quezon.

Their expenses are being shouldered by the church-based Tribal Center for Development (TCD), which has received funding from foreign organizations.

“Some benevolent residents of Infanta and neighboring towns also extend assistance to our college scholars,” said Astoveza, who is also the TCD director.

A scholar needs at least P26,000 every semester for tuition, food, lodging and miscellaneous expenses.

Astoveza said the tribe elders had found it heartwarming that most young tribesmen want to pursue their studies, but the TCD cannot provide for all of their needs due to the high cost of college education. The Agta people depend on farming, fishing in mountain rivers and gathering rattan, and other mountain resources for a living.

The Agta leader said the indigenous people’s quest for knowledge through the orthodox educational system “is imperative” in these modern times so they could survive and protect their own culture and civilization.

One of the Agta students sees his scholarship as a “blessing.”

“For an Agta youth, being a college student is a rare privilege and a golden opportunity,” said Vergel Eneria, a TCD college scholar who is now on his third year in an agriculture course at Southern Luzon State University-Infanta campus.

He recalled how he struggled to reach college after receiving early education from the Sentrong Paaralan ng mga Agta (SPA) and completing his secondary education in two years of informal school. He said he had to divide his time between school and farm work to help his family.

“Life in the mountain is an endless struggle for survival for the indigenous people,” Eneria said over the phone.

He remembered his first day in college as one intimidating experience.

“I was nervous in my new environment with all strange faces around me. But I was determined to have a college degree. I eventually overcame all the initial hurdles. Soon, I found new friends and learned to adopt to campus life,” Eneria said.

To help sustain his college education, Eneria works as a student assistant. He has been given living quarters inside the campus in exchange for feeding the pigs and attending to other tasks.

Every weekend, Eneria hikes his way back to his community in the Sierra Madre mountains in the neighboring town of General Nakar to share his newfound agricultural know-how to fellow tribesmen.

“Most often, I act as weekend instructor to SPA students. I’m happy to share to them the latest techniques on how to improve the harvest of our traditional crops and other things, which I find beneficial to our community,” he said.

After graduation, Eneria said he would work full-time as tribal agriculturist to help improve the farming practices of the Agta.

“I will also devote time to help protect and rehabilitate Sierra Madre. The mountain is our home. It is my solemn duty to protect her,” he said.

Ten of the 14 Agta scholars are women. The scholars are taking up nursing, education and agriculture courses.

The SPA, an alternative school of learning for young tribesmen, was established by the TCD and the Catholic Prelature of Infanta in 1987 in the mountain village of Catablingan in General Nakar.

It aims to help the youths acquire basic education to help them face the future.

The three-classroom building of the SPA was constructed from funds provided by the TCD and the church, with labor contributed by the tribesmen bayanihan (cooperative) style.

But just like most Filipino children in public schools, young Agtas returned this month to their school, which lacks books and other basic learning tools, and equipment.

“We have these same old problems every school opening. This is the bitter reality facing mountain schoolchildren,” Astoveza said.

Catablingan is half-a-day hike from the town proper and could be reached by an occasional tricycle. A bumpy half-hour uphill ride costs P350 for six passengers.

At least 70 Agta children are enrolled for the current school year.

The education of a young Agta is tough and uphill battle, Astoveza said

He narrated how most of the high school youths had been offering their services to lowlanders in exchange for free education and sleeping quarters.

“We call it pakinabangan (mutual help),” said the tribal governor.

Astoveza said the school was still awaiting recognition from the Department of Education (DepEd) so it could receive governing funding.

The school has one Agta teacher, who also serves as principal. The teacher is assisted by four natives. Two of them are college graduates who serve as “facilitators,” while the other two are SPA graduates who have been trained to teach.

SPA graduates who want to continue their studies in the lowland must take and pass accreditation tests.

Last year, SPA principal Wilma Quierrez said that after several of their graduates passed the accreditation and equivalency tests several years ago, the mountain school was able to receive teaching modules from the DepEd through its Alternative Learning System.

The curriculum was designed for multigrade teaching. The class was divided into levels of competency and learning skills, Quierrez explained.

In 2011, the total population of the SPA reached 204, of whom 108 were in the main school in Catablingan and the rest in four “community learning centers” (CLCs) found in tribal villages.

Astoveza described CLC as a “convenient place anywhere” where the teacher and the students meet and study under a shady tree or a makeshift hut. “As long as they are all convenient,” he said.