Who’s to blame for the floods? Aquino calls meetings 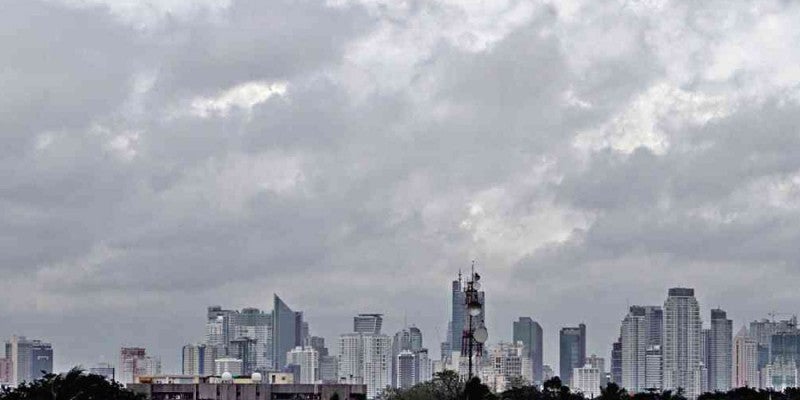 STORM THREAT Dark clouds loom over the horizon on Tuesday as Metro Manila braces for the rains that Tropical Depression “Emong,” which has intensified into a storm, is threatening to dump on a metropolis already saturated with the previous day’s heavy rains. Emong is expected to exit on Thursday, but not before intensifying the monsoon. GRIG C. MONTEGRANDE

It’s that time of year again of massive flooding and traffic jams, and in the midst of it all President Aquino called an emergency meeting on Tuesday to assess yet again Metro Manila’s preparedness to deal with the monumental mess during a heavy rain.

Who is to blame for the flooding, the traffic standstill for hours and commuters marooned well into the night on Monday?

“Who is in control of everything? Metro Manila is just like any other place in the country wherein by the sheer design of our democracy, it’s not just one person who’s involved,” Almendras said. “We can’t just blame one person.”

He cited as example those who carelessly throw their garbage just about anywhere, which eventually clog drainage, waterways and canals.

President Aquino had an 11 a.m. meeting on Tuesday on “Metro Manila flooding,” which was preceded by a meeting with the Department of Transportation and Communications.

In attendance, aside from Tolentino and Singson, were Executive Secretary Paquito Ochoa, Interior Secretary Mar Roxas, Budget Secretary Butch Abad, and the heads of the Presidential Management Staff, Department of Science and Technology, and Philippine Atmospheric, Geophysical and Astronomical Services Administration (Pagasa).

Asked who was on top of the flood mitigation program, Almendras said several government officials were involved.

Instead of pinning the blame on someone, he said: “What is important is that those tasked to trace (the root cause) of the problem are working together. The problem is so enormous.”

“Your population has increased, your coverage has increased … and the rains have been very challenging,” said Almendras. “God can’t be blamed either for sending the rain.”

At the Palace meeting, the President checked on the status of the projects under the flood control master plan, which was approved last year following the onslaught of “habagat” (southwest monsoon) in August that dumped intense rains and triggered massive flooding that paralyzed the capital.

Aquino earlier announced that there were at least three infrastructure projects that could be finished in two to three years to deal with the perennial flooding in the metropolis and outlying areas.

He referred to a ring-road dike on the rim of Laguna de Bay, embankments and catch basins in the Marikina River watershed, and an 8-kilometer dike and pumping station in Camanava (Caloocan, Malabon, Navotas and Valenzuela) area.

At press time, the Palace has yet to update the media on the progress of these projects, along with the repeatedly announced relocation of squatter huts along esteros and riverbanks.

The Department of Public Works and Highways (DPWH) announced last August a P352-billion flood control master plan that would reduce the vulnerability of Metro Manila and outlying provinces to flooding during heavy rain. It was envisioned to be completed in 2035 and covered 11 major infrastructure projects.

The construction of the Marikina large dam plus improvements on the Pasig and Marikina river embankments, and the West Laguna lakeshore land-raising are considered “very high priority projects.”

The DPWH plans to set aside only P84 billion for its flood control projects from 2011 to 2016.

The master plan was approved by the National Economic and Development Board last September with an initial allocation of P5 billion.

Asked about Metro Manila’s flood resiliency, Almendras said: “I know the MMDA has been preparing for it. I’m not sure if all of the esteros (have been cleared) but there’s also a component of the private sector role in making sure that their own canals are clean.” He noted improvements in the embankments of rivers in the National Capital Region.

“It’s about how to get the water into those catchment areas as fast as we can. And some of the projects, I will not deny, cannot really be finished in three years. The interceptor canal in the Manila area, that’s really going to take three to four years to do and when did we start doing that? (This is) not to justify any delay. There are just infrastructure projects that really take a long time,” he said.

Deputy presidential spokesperson Abigail Valte insisted that the government had “contingency plans” or short-term measures to address flooding and traffic congestion during heavy rains, including the deployment by the MMDA of buses and trucks.

But she noted that recent attempts by the Department of the Interior and Local Government and the MMDA to relocate squatters had been “met with resistance” midway into the Aquino administration’s six-year term.

“I understand that most of the informal settlers prefer on-site or in-city relocation,” Valte said.

In a news conference, Legarda said she planned to call for an “environmental audit” that would require at least three Senate oversight committees to examine how the government had responded to factors that contributed to flooding and its accompanying tragedies during heavy rains.

Tolentino has a new short-term solution. He said students and workers should be dismissed an hour earlier than usual to avoid the traffic jams and floods during downpours, noting that rains usually pour at 5 p.m.

“According to the Pagasa, the heavy rains during the afternoon will last until Friday, so we are appealing to the schools, private and government offices to allow students and workers to be off by 4 p.m.,” Tolentino said in a radio interview.—With reports from Cathy Yamsuan and Niña P. Calleja