Are all freedoms of expression art? Who knows? | Inquirer News
Close
menu
search

Are all freedoms of expression art? Who knows? 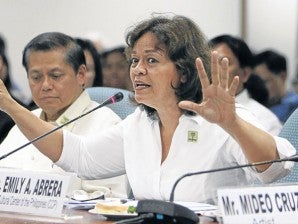 FREEDOM OF EXPRESSION OR BAD ART? CCP chair Emily Abrera explains to senators why the CCP pushed through with the controversial art exhibit by artist Mideo Cruz. Beside her is CCP president Raul Sunico. Cruz was a no-show. LYN RILLON

The debate is far from over: Are all freedoms of expression protected by the Constitution or are there limits? And what are the limits?

Priests and two national artists were on Tuesday unconvinced that freedom of expression could be invoked to defend artist Mideo Cruz’s “shock art,” which has caused a controversy that forced the closure of an exhibit at the Cultural Center of the Philippines (CCP).

“Nothing is obscene in art. There are only bad artists and bad writers,” National Artist for Literature F. Sionil Jose said at the inquiry conducted by the Senate committee on education, culture and arts.

“The issue here is not freedom of expression [but] art. I saw the photos [of Cruz’s work] and it is not art. The photos illustrate how the artist is immature and juvenile,” Jose said.

National Artist for Visual Arts Abdulmari Asia Imao said he was particularly offended by Cruz’s decision to put a phallic symbol on the forehead of an image of the Sacred Heart of Jesus.

“Mabigat… (It’s quite grave). I am a Muslim [yet] I know my religious parameters,” Imao said.

Jose and Imao were among a number of resource persons called to give inputs on the controversy over Cruz’s installation, “Poleteismo.”

The installation and the works of 31 other artists were featured in the exhibit titled “Kulo” at the CCP main gallery until Aug. 5.

Cruz did not attend the hearing.

Sen. Edgardo Angara, the committee chair, later announced that he would not recommend sanctions against the CCP board.

“The officers already said they are reviewing their policies related to exhibits and other public activities. I have already adjourned the hearing,” Angara said.

CCP chair Emily Abrera said the public outcry and threats of physical harm against board members were the reasons for the closure of the exhibit that was to have run from June 15 to Aug. 21.

The CCP made a PowerPoint presentation of Cruz’s work that also included a Christ the King sculpture with Mickey Mouse ears, a crucifix with pink condoms resting on its horizontal bars, and another crucifix with a red phallic symbol jutting out.

Abrera said the use of religious icons were not “a comment about religion but how society treats things we idolize.”

But Jose said: “The CCP should be more sensitive to the definition of art, of Filipino art. [Art] is the work of creative imagination and propounds [a message].

“[Cruz’s work] is not art at all. I hope that in the future, our friends in the CCP would be more perceptive of the very profound and great demand of what art is.”

Cebu Archbishop Rev. Jose Palma said Cruz’s works were offensive to the clergy “because it’s not just a picture [but] a picture of Jesus Christ, the picture of God, someone we adore.”

“We would be mad if the same is done to a picture of a loved one, more so God. It should not be repeated,” added Palma, the vice president of the Catholic Bishops’ Conference of the Philippines.

Fr. Pablo Tiong of the University of Santo Tomas (UST) denied that it had a direct involvement in the exhibit, and maintained that freedom of expression was not absolute.

“This exhibit did not have UST’s blessing or endorsement … and it has placed [the university] in a very embarrassing position,” he said.

Tiong also said that while Cruz joined the exhibit of UST alumni-artists, he was not a graduate of the university.

Raul Pangalangan, a columnist of the Inquirer and a former UP law dean, said Philippine courts had given “latitude” to freedom of expression.

Pangalangan, a member of the 1986 Constitutional Commission, cited a case where the Catholic Church objected to utterances made by Iglesia ni Cristo about the Virgin Mary.

He said the court ruled that “it must protect the speech however unclean it may be” and that “it cannot censor the speech … simply because it attacks other religions.”

A second case in which the Islamic Dawa Council filed a defamation case against a tabloid also failed to prosper, according to Pangalangan.

He said that after the tabloid called Muslims “pig worshippers” for their refusal to eat pork, the court still refused to side with the Islamic group and said a defamation suit “needed a specific victim because imputation of slight is not enough.”

Lawyer Florin Hilbay of the UP College of Law said freedom of expression was crafted “for those forms of expression that disturb, offend and even anger us…”

“If [we] all like the same forms of expression, there wouldn’t be need for it,” Hilbay said, adding:

“The CCP has discretion to exhibit but it did not go out of its way to offend the public, or exert effort to offend the Catholic faith. No one was compelled to look at the exhibit.

“The state response should be to protect the CCP board from potential harm.”

But Palma countered that if freedom of expression did not cover violence, it should not apply to Cruz’s offense of violating Jesus’ images.

“There is no desire to hurt the CCP or Mideo but great violence was done to the photographs of Jesus that we consider to be very sacred. Do not insult or hurt us by putting that kind of violence in pictures we consider very sacred,” Palma said.

Jose butted in: “That’s why I’m saying the artist is not good. It’s like young people putting a moustache on pictures [when there should be recognition that] Jesus was beaten up, crowned with thorns and crucified.”

Tiong referred to Article 19 of the Civil Code stating that every person must “act with justice, give his due and observe honesty and good faith.”

Imao recalled that he also had issues with creative expression, especially after he began specializing in crosses despite being faithful to Islam.

“The Muslim brothers got mad. They said I should not do that. It is not permitted. I said God did not prohibit me from using my talent,” Imao said. “Cruz’s error was that he did not put limits to his imagination. There was an excess in his creative expression … Let’s give him a little patience.”

In a letter to Catholic priests, religious communities and schools in the capital, Manila Archbishop Gaudencio Cardinal Rosales called for acts of penance and sacrifice to seek God’s forgiveness for Cruz’s “repulsive work.”

For one week—Aug. 21 to 28—a “Prayer for Reparation” will be read after communion in all Masses in the Archdiocese of Manila, Rosales said. Aug. 26 has been designated as a “Day of Penance.”

“As a Church, we will kneel before our loving God to pray and seek reparation for this public sin,” Rosales said.

“For us Catholics and Christians, the offense goes beyond visual senses; it strikes into our souls. The public exhibition of the repulsive work is sacrilege and blasphemy. It is a sin,” he said. “It has deeply offended the Father, Jesus, the Holy Spirit, the Blessed Mother and our Church.”

The cardinal called on priests to celebrate a “Mass for the Forgiveness of Sins” on Aug. 26 and to wear purple vestments.

“We also encourage everyone to perform an act of penance or sacrifice on this day, such as fasting or other forms of mortification, as an expression of remorse for the sins committed against God’s majesty, he said.

According to Rosales, “many agree” that Cruz’s work “overreached the boundaries of freedom of expression.”

“Most say it is offensive and a great affront to Catholics and Christians, and to all people who value decency. To them the work is ‘trash.’ And we agree,” he said.

In Bacolod City, some members of the Arts Association of Bacolod joined a Church-led indignation rally against Cruz’s work on Monday afternoon.

The group’s president, Sonny Golez, read a statement during the rally in front of San Sebastian Cathedral saying the controversy brought about by Cruz’s work was not representative of the dynamics of coexistence between artists and other sectors of society.

He said that freedom, expression, respect, aesthetics and culture could be subjective, and that it was best to be responsible.

Bacolod Bishop Vicente Navarra called on artists to pool their talents, skills and efforts to produce exhibits that “attract not only what is noble but also works that challenge the viewing public to rise from the smut and dirt created by those who demean your profession.” With reports from Philip C. Tubeza in Manila; and Carla P. Gomez, Inquirer Visayas