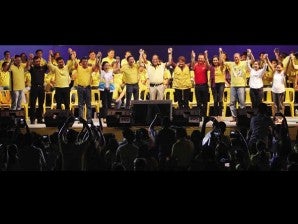 MANILA, Philippines — President Aquino and Malacañang should disclose how much they spent in campaigning for Liberal Party (LP) candidates in the recent midterm election as the money could be part of public funds, an election watchdog said on Monday.

The Commission on Elections (Comelec) requires all candidates in the May 13 elections to submit a statement of contributions and expenditures (SOCE) within 30 days after the election, or up to June 12.

“President Aquino, who vigorously campaigned for the administration coalition, should also disclose how much his office spent during the  election,” said Renato Reyes Jr., a convenor of Kontra Daya.

“In the spirit of transparency, a proper accounting should be made,” the Kontra Daya official said, adding that the President’s attendance at campaign sorties “were not necessarily connected with the functions of his office.”

Director Esmeralda Ladra, head of the Comelec law department, said the President and Malacañang might have to divulge how much they spent if they contributed to the LP campaign.

Candidates are required by law to submit an accounting of their campaign expenses, and “if the President is a contributor, maybe (he has to do so as well),” according to Ladra in an interview.

But deputy presidential spokesperson Abigail Valte flatly denied Kontra Daya’s accusation that President Aquino had used state funds to  campaign for the administration’s senatorial candidates in the May election.