Vietnam arrests third blogger in less than a month 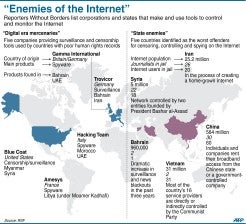 FRANCE: Graphic on a report about online spying compiled by Reporters Sans Frontiers, alleging that Syria, China, Iran, Bahrain and Vietnam are the worst state offenders for using Internet surveillance to crackdown on dissent. AFP

HANOI — Vietnamese police have arrested a blogger accused of posting “erroneous and slanderous” information about the communist government, the third blogger to be locked in the past month in an intensifying crackdown against dissent.

The state-run Thanh Nien newspaper reported Monday that Dinh Nhat Uy was taken into police custody in southern Long An province on Saturday. He is accused of “abusing democratic freedoms,” an offense that carries up to seven years in prison.

The 30-year-old is the brother of Dinh Nguyen Kha, a student who was sentenced last month to eight years in jail for spreading propaganda against the government.

Two well-known bloggers have been arrested over the past three weeks on the same charges.