Actor-businessman Marvin Agustin was moved by Russell Molina’s “Tuwing Sabado,” which he read before kids on the Inquirer Read-Along session on the eve of Father’s Day.

The story about a child who looks forward to Saturdays because it is the day he gets to visit his father who is in prison is guaranteed to tug at the heartstrings.

But for the neophyte storyteller, it was simply too “close to his heart.”

Agustin told the children gathered at the Inquirer office in Makati that like the protagonist, his father was also in prison when he was a kid.

“The situation at that time was a challenge and a crisis to our family, but we tried to be positive about it,” he said, noting that his relationship with his father today is “good.”

Agustin’s advice to children in a similar situation? Have a positive outlook. “I know it is not easy growing up without a parent but you should stay strong and be positive,” he said.

Agustin, who brought along his 7-year-old twins Santiago and Sebastian, said he enjoyed his first storytelling stint. “It was especially nice to experience it with my sons,” he said.

“I think it is important to encourage kids to read, not only because it is educational, but also because it is a very good hobby,” Agustin said.

“When I was young, I used to force myself to read. But now, I enjoy reading anything—newspapers, magazines, novels, self-help books. Actually, I get a lot of tips for my business through books,” said the actor, who owns a number of restaurants. 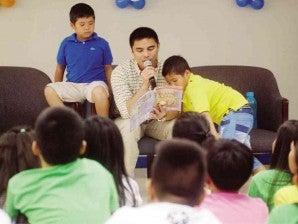 CELEBRITY DAD Actor-entrepreneur Marvin Agustin visits the Inquirer with his twins, Santiago and Sebastian, and plays father to the kids at the Inquirer Read-Along session. ARNOLD ALMACEN

The Sophia School teachers read “May Higante sa Aming Bahay” by Rhandee Garlitos, which tells of a child who gets to know his father, a returning overseas Filipino worker.

Earlier, Abacan also led a storytelling workshop with volunteers from Tuloy sa Don Bosco Foundation, Hands-On Manila, Makati Sporting Association and San Leonardians of Nueva Ecija, the second of the two-part workshop for the Read-Along Champions program, which is geared toward forming groups tasked to promote love for reading in their respective communities and schools.

“I imagined how sad I would be if I were in the same situation,” Quelnan said.

Austin said she liked the story because she “felt the excitement of the character whenever he would see his father.”

Asked what they were planning to give their dad on Father’s Day, Quelnan said he would “tell his dad that he was the best father in the world,” while Austin said she would make a card for her dad.

The story “Tuwing Sabado” was also a favorite of 11-year-old Meriel Ann Baniaga. “I learned how not to judge people because of what they have done in the past,” she said.

For Anna Francesca Cagurangan, 11, the story “May Higante sa Aming Bahay” was what struck her the most. “I learned how important a father’s love is,” she said.