Political turmoil at home as Obama heads to Europe 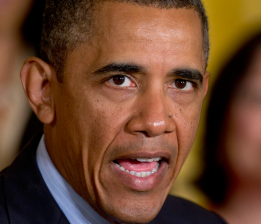 In this June 10, 2013 file photo, President Barack Obama speaks in the East Room of the White House in Washington. Wondering what the U.S. government might know about your phone calls and online life? And whether all of this really helps find terrorists? Good luck finding solid answers. Americans trying to wrap their minds around two giant surveillance programs are confronted with a mishmash of leaks, changing claims and secrecy. Congress members complain their constituents are baffled and many lawmakers admit they are, too. AP

WASHINGTON — President Barack Obama heads to next week’s summit of world leaders in Northern Ireland burdened by a messy domestic political landscape and distracting controversies. The latest one — about a leaked global surveillance program — has outraged people abroad and could cast a shadow on his trip.

The question is whether the growing political battles will affect Obama’s standing at a G-8 summit of leading industrial countries, where he now will be dealing with reactions to his decision to arm Syrian rebel forces after a U.S. finding that President Bashar Assad’s regime has used chemical weapons.

The decision should put Obama more in line with Europeans who made similar findings weeks ago. It also sharpens the differences with Russian President Vladimir Putin, an Assad supporter, who will also attend the summit.

Obama travels to Northern Ireland and later to Germany as he struggles on the domestic front. Despite his convincing victory in November, an improving economy and his still-respectable popularity numbers, his second-term agenda has stalled. An effort at gun control failed in the Senate, and his bid for a grand bipartisan bargain to cut government spending without harming the neediest Americans seems dead.

His last big hope for a big legislative win rides on an overhaul of immigration laws.

Yet it’s hard to keep lawmakers focused on immigration or much else with Obama on the defensive over a series of controversies. Republicans, who control the House of Representatives, have been denouncing the administration’s actions surrounding a terrorist attack in Benghazi, Libya, last year that killed the U.S. ambassador and three other Americans.

Beyond that, Obama’s Justice Department took the unusual step of subpoenaing phone records of The Associated Press without prior notification and obtaining a search warrant to secretly gather emails of a Fox News journalist. That prompted an uproar over what many critics saw as a violation of constitutional protections of press freedom.

The NSA operations on foreign communications traffic might cause trouble for one of Obama’s top goals at the G-8 summit. The president hoped the G-8 leaders could announce the start of negotiations on a sweeping free-trade agreement to eliminate tariffs on trade with the European Union. European Parliament members, elected representatives from the 27-nation EU, now want language on data protection written into any possible deal.

Hannes Swoboda, a Socialist leader in the European Parliament, said the surveillance showed that the U.S. “is just doing what it wants.”

At the same time, however, Germany’s interior minister, Hans-Peter Friedrich, confirmed that his government regularly receives tips from the United States on Islamic extremists — and he doesn’t expect the Americans to tell him where they got the information.

“We get very good and reliable information from our American friends and partners that has played an important role in the past in preventing attacks in Germany,” Friedrich said.

German Chancellor Angela Merkel plans to raise the NSA issue with Obama when he visits Berlin after the summit.

Obama’s voice remains first among equals at the G-8 gathering given his leadership of the nation with the world’s biggest economy and his role as commander in chief of the dominant global military power. With much of Europe still struggling and some countries still deep in a new recession, the slowly improving U.S. economy lends Obama strong credibility.

But Obama had faced criticism, at home and abroad, for appearing tentative in his response to the Syrian civil war. That could change following the announcement Thursday of plans to arm opposition fighters, though the extent of U.S. weapon supplies to the rebels remains unclear.

The announcement will also intensify the spotlight on Obama’s meeting with Putin in Northern Ireland. The Russians have refused to back away from their support for the Syrian leader. Obama has said repeatedly that the Syrian civil war can only end with Assad’s ouster.

That dispute between Washington and Moscow, rivals who stood toe-to-toe in a superpower standoff through the Cold War, remains one of just a number of continuing irritants preventing a more normal U.S.-Russian relationship, something that Obama began his presidency hoping to construct. And that’s just one of many plans the president had for domestic and foreign policy that have fallen by the wayside.