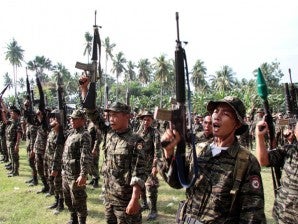 “As far as I am concerned, this is not a very good situation,” Jaafar said, citing what he called “the erosion of confidence and trust in the Philippine government that it is really decided to address the Bangsamoro issue.”

Jaafar said the MILF’s frustration stemmed from the delay in the signing of a comprehensive peace agreement, which he said appeared to be “deliberate.”

He said that, for one, the government had said formal talks would resume in Kuala Lumpur after the May elections and yet up to this time no schedule had been set.

While waiting for the talks to resume, there should have been an exchange of notes between the two panels but this has been delayed as well, he said.

In a statement earlier, government chief negotiator Miriam Coronel-Ferrer said “even without the conduct of formal meetings, the peace process continues to move forward.”

“Government hopes this process will allow the parties to gain more clarity with respect to the current language of the annexes and lead them to an agreement on the unresolved issues,” Ferrer said.

She said that while the wealth-sharing annex had indeed been initialed by the two panels, “prudence on the part of the government requires that it undergoes a final review before the President gives his final stamp of approval.”

Ferrer said the amendments to the wealth-sharing annex were being proposed to ensure that the Bangsamoro entity to be set up “will enjoy effective and meaningful fiscal autonomy and also take into account the legal, political and administrative constraints of the central government.”

“These are the considerations as to why the government wishes to introduce some changes to the draft annex, particularly with regard to some aspects of taxation, fund-transfer mechanisms and revenue sharing,” she said.

“But he better check and ensure that what he wants [in the negotiations] to attain peace is what will prevail,” Jaafar said.

It has been rough sailing since the signing of the framework agreement, with the two panels still hammering out the details of the annexes on wealth sharing, power sharing and normalization.

The proposed Bangsamoro region sought to be created aims to replace the present Autonomous Region in Muslim Mindanao by 2016.