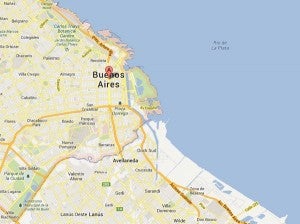 BUENOS AIRES — A train crash on the outskirts of Argentina’s capital Buenos Aires has claimed an unconfirmed number of lives and injured dozens of people, an official said Thursday.

Lucas Ghi, mayor of the nearby town of Moron, said he was still awaiting details on the number of fatalities and that between 50 and 60 people were hurt in the accident about 30 kilometers west of the city.

The crash happened near the Castelar stop when a passenger train rammed another train that was empty and stationary, according to the reports.

Rescue workers and volunteers were at the scene to help the wounded trapped by the collision, which television reports said happened at around 7:30 a.m. (1030 GMT). Dozens of ambulances were also at the crash site.

Hospitals in the area were on alert to deal with casualties.

“I heard a loud noise and everyone started falling down, and people were shocked and crying,” said a 26-year-old passenger who identified herself as Lida.

The collision took place on the Sarmiento rail line, which links the western suburbs to downtown Buenos Aires.

It was on this line that one of the worst rail accidents in Argentine history left 51 dead and more than 700 wounded in February 2012.