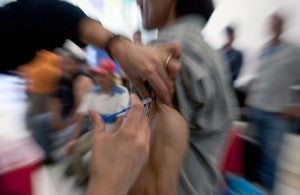 CEBU CITY—The government has allotted at least P1.9 billion for a massive vaccination program for children of the country’s poorest families, according to a ranking health official.

The expanded program initially benefited at least 700,000 infants from the 5.2 million families identified as poorest of the poor by the Department of Social Welfare and Development (DSWD) through its National Household Targeting System.

Tayag said that another P3.4 billion would be allocated for the EPI next year.

Tayag said pneumonia and diarrhea were the top two killer diseases among children.

The EPI was expanded last year to include immunization for rotavirus, making the Philippines the first country in Southeast Asia to immunize against the virus that causes acute infantile gastroenteritis and diarrhea among children. The EPI also included the pneumococcal conjugate vaccine (PCV).

Pneumococcal diseases include meningitis, blood infection and pneumonia. Infected individuals may suffer from a combination of high fever, chills, cough, shortness of breath and chest pain.

For a mother like Sheila Mae Colina, having her 11-month-old baby girl vaccinated with PCV is protection for her child against serious illnesses.

Colina’s baby, Bellus Gift, was among the recipients of the PCV during a ceremonial vaccination program on Wednesday at  Radisson Blu Hotel in Cebu City, which was among the activities of the Asian Vaccine Congress.

Tayag was among the speakers of the 4th Asian Vaccine Congress, which was also held at the same hotel. “It is very important. It (PCV) will prevent my baby from having pneumonia. The health of my baby is my primary concern,” Colina said.

Maricel Castro, World Health Organization (WHO) technical officer, said the WHO was endorsing the 2011-2020 Global Vaccine Action Plan (GVAP) for the prevention of millions of deaths from preventable diseases. This was first introduced during the World Health Assembly in May last year to 194 member states of the WHO.

GVAP is a program to prevent between 24.6 and 25.8 million deaths by the end of the decade. This can be achieved by giving greater access to vaccines.

One of GVAP’s main goals is to free the world from poliomyelitis, more popularly known as polio.