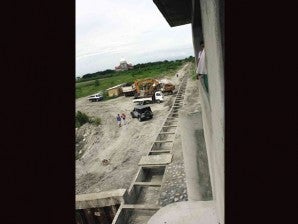 CITY OF SAN FERNANDO—The Pampanga Chamber of Commerce and Industry (PamCham) has asked the Department of Public Works and Highways (DPWH) to assess the safety of the FVR Megadike against floods and lahar to ensure the long-term growth of Pampanga and this capital city.

PamCham made the request two days before the 22nd anniversary of Mt. Pinatubo’s 1991 eruptions. The volcano first released a huge, cauliflower-shaped cloud of ash on June 12 that year. The Philippine Institute of Volcanology and Seismology recorded the cataclysmic blasts on June 15.

The eruptions, the world’s second largest in the 20th century, displaced 1.3 million residents in Pampanga, Tarlac and Zambales where more than 1,000 people died of diseases while in evacuation centers.

“It is inevitable that we recall the things that went right in the scheme of human planning and decision that helped save the day for us,” PamCham leaders said in a June 10 letter to Antonio Molano Jr., DPWH director in Central Luzon.

“Undoubtedly, the construction of the FVR Megadike, which has been since a source of security and confidence for Kapampangan, especially for the people of the City of San Fernando, was one of them,” PamCham president Jim Jimenez, vice chair Rene Romero and chair Levy Laus said in the letter.

The 56-kilometer, U-shaped megadike catches volcanic sediments washed down by rains to the Pasig-Potrero River from the volcano. It was named after former President Fidel Ramos, whose administration funded its construction.

The DPWH built it in 1997 around Bacolor’s 17 villages at an original budget of P900 million. Tonette Orejas, Inquirer Central Luzon