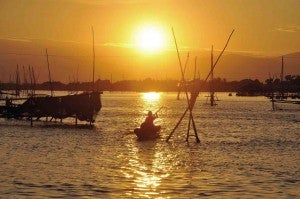 DAGUPAN CITY, Philippines–Acting Mayor Belen Fernandez has given illegal fish pen operators here until Aug. 31 to dismantle their structures from the city’s rivers or the city government will demolish them.

Fernandez issued the ultimatum after more than 200 pens stocked with bangus (milkfish) sprouted in the city’s rivers from January to early May this year.

The city’s rivers were cleared of pens and other fishing structures in 2010 after the city government conducted massive dismantling operations.

“I have had two meetings with them and I gave them that grace period,” Fernandez said. “I also told them not to test my patience. I am kind but I can also get angry.”

City agriculturist Emma Molina said that the grace period should be more than enough time for operators to harvest their stock.

Bangus, which is the major aquaculture product of this coastal city, are grown for 120 days.

During their meeting with Fernandez, the operators volunteered to dismantle their pens right after harvest, Molina said.

“My task now is to determine when they will harvest. That’s why we are tagging the pens by using red paint so we will easily see them as the existing pens,” she said.

“Through this, we can also prevent people from taking advantage of the grace period by putting up new pens,” she said.

Molina said her office has been profiling and mapping the pens so they would know the size of stocks in each pen and to easily see what pen should go first and which part of the river should already be cleaned at a certain date until Aug. 31.

“By profiling, we will also be able to determine how many stocks will be marketable by July,” she said.

Molina also said the stocks in some of the more than 20 pens built earlier this year had been harvested and the structures had been pulled out from the river.

“The others were just waiting for their harvest schedules from the city’s fish market,” she said.

“Still others were saying that they were just waiting for the price to improve. But I told them that prices during June and July were historically lower compared with previous months,” she said.

She said traders from other provinces do not come as frequently as they do during other months because these are lean months and bangus sale is slow.