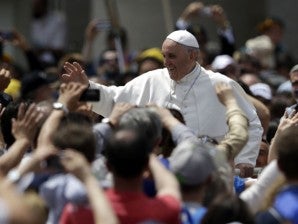 Pope Francis greets the faithful in St. Peter Square at the Vatican, after celebrating a Pentecost mass. INQUIRER FILE PHOTO

VATICAN CITY — Pope Francis on Wednesday railed against the “deplorable” exploitation of children in domestic work, saying cases of child labor were on the rise in poor countries and affect young girls in particular.

“There are millions of minors, mostly young girls, who are victims of this form of hidden exploitation which often includes sexual abuse, poor treatment and discrimination,” he said in a message to mark World Day Against Child Labor.

Francis called on the international community “to take ever more effective measures to fight this plague,” which he said was “a deplorable phenomenon constantly on the increase.”

According to figures published Thursday by the International Labor Organization (ILO), an estimated 10.5 million children worldwide are working as domestic workers in people’s homes.

Six and a half million of these child laborers are aged between five and 14 years old and more than 71 percent are girls, it said.

“It is slavery!” Francis told 60,000 pilgrims gathered in St. Peter’s Square for his weekly audience.

“All children should be able to play, study, pray and grow, in their own families, in a harmonious environment, one of love and serenity. It is their right and our duty,” he said.

The ILO report said children doing domestic work were “vulnerable to physical, psychological and sexual violence and abusive working conditions” and were “often isolated from their families (and) hidden from the public eye.”