US-China climate deal was long in the works 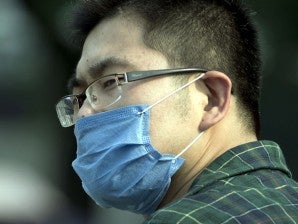 A man wears a face mask on a street in Beijing Friday, May 31, 2013. U.S. climate change envoy Todd Stern and his Chinese counterpart Xie Zhenhua said Friday their talks in Beijing on clean energy initiatives were productive—but provided no details. The two are leading a working group on climate change that will present recommendations to the governments of both countries when they meet in July for the Strategic and Economic Dialogue in Washington. AP

WASHINGTON— Disparate interests ranging from environmental activists to businesses and industry are lining up to support a first-of-its-kind deal between the U.S. and China to phase out a chemical blamed for climate change.

Although it took most proponents by surprise, the deal was in the bag before President Barack Obama and Chinese President Xi Jinping arrived at the California desert retreat where they announced it over the weekend. And for China, it came only after a change in financial incentives made it more lucrative to get on board than to continue holding out.

The thermometer was hitting 103 degrees Fahrenheit (39 degrees Celsius) on a lush estate outside Palm Springs on Saturday when the White House said that Obama and Xi, the leaders of the world’s two largest economies, had struck a deal showing China was getting serious about the warming of the planet. The White House trumpeted it as an example of practical cooperation with the polluting superpower — a bright spot in a summit dominated by testier issues like cyberspying.

The idea is for the U.S. and China to work together to use a decades-old ozone-protection treaty called the Montreal Protocol to phase out hydrofluorocarbons — coolants that flow through refrigerators and air conditioners. Hydrofluorocarbons — or HFCs — don’t deplete the ozone layer, but they’re potent greenhouse gases, far more powerful at trapping heat than carbon dioxide.

Offering grand predictions, the White House and environmental groups said a global phasedown of HFCs could, by 2050, eliminate about two years’ worth of greenhouse gas emissions compared with current levels. Former White House Chief of Staff John Podesta, now the chair of the Center for American Progress, said it could avert almost a degree in Fahrenheit of warming temperatures by the end of the century.

The industry that relies on the coolant is on board, too. Francis Dietz of the Air Conditioning, Heating and Refrigeration Institute said businesses want long-term predictability even if it means short-term costs to perfect replacements. Even DuPont Co., a major chemical manufacturer that makes HFCs, supports phasing them out and has been developing alternative products.

“It’s a model for broader climate change initiatives,” said Sen. Ben Cardin, a Maryland Democrat who urged Obama before the summit to bring it up with the Chinese.

It was a visit to Beijing by Secretary of State John Kerry in April that set the process in motion, according to an administration official, who wasn’t authorized to speak on the record and demanded anonymity. He sent Todd Stern, the U.S. special envoy for climate change, back to China two weeks ago to continue the discussions. In a series of video conferences and phone calls in the week leading up to the Obama-Xi summit, the two countries hashed out a deal and agreed to unveil it in the California desert.

The concept dates back at least to 2009, when the U.S., Canada and Mexico proposed using the 1987 Montreal Protocol to phase out HFCs, which had been used to replace other refrigerant chemicals that do deplete the ozone layer. Unlike the global warming-focused Kyoto Protocol, which the U.S. never ratified, the Montreal Protocol has been met with little ideological resistance, and the Senate voted unanimously to approve it. Every country in the world is a party to it, the White House said.

More than 100 countries have backed using the existing treaty to deal with HFCs, but China — the world’s biggest producer of HFCs — and other developing nations like India and Brazil have blocked it. And where China goes, the others were expected to follow — a phenomenon that may extend to other global climate efforts.

“China is the biggest kid on the block,” said David Doniger of the Natural Resources Defense Council. “Our perception is they have been sticking together” with India and Brazil.

For Obama, whose bold vow to slow the rise of the oceans has confronted major obstacles, it was an opportunity to show action on a key aspect of his domestic agenda. In his second-term inaugural, Obama pledged to take action alone if Congress would not, but he has frustrated environmental activists by being slow on the uptake when it comes to regulations under his control.

“Congress is not willing to even hear from the scientists — let alone take action,” said Rep. Henry Waxman of California, another Democrat who pushed Obama seek a deal with the Chinese. “The president has to act wherever he can.”

For notoriously pragmatic China, it may have been more about dollars and cents.

Environmentalists complained for years that China abused a system that let European companies meet greenhouse gas limits by purchasing credits from factories and power plants in China and other developing countries that reduced their own emissions. But the credits were priced based on how much carbon dioxide equivalent was eliminated. A potent byproduct of HCFs, known as HFC-23, traps thousands of times as much energy, so credits for the destroying byproduct sold for up to 70 times the cost of eliminating the gas itself.

The payments were so generous that Chinese companies had an incentive to produce more gas, said Clare Perry, a senior campaigner for the London-based Environmental Investigation Agency. She said China’s government shared in the windfall, reaping more than $1 billion through a 65 percent tax on payments for destroying the byproduct.

The European Union eventually caught on, and banned payments for the byproduct effective May 1. A week earlier, the U.N. Environmental Program said it would pay Chinese companies up to $385 million by 2030 to phase in HFC alternatives. Taken in tandem, the two moves eliminated the incentive to keep HFC production high while introducing a new incentive to phase out the gas.

The first test for whether the U.S.-China deal will presage a global breakthrough comes in two weeks, when the Montreal Protocol nations meet in Bangkok. If other developing countries like India follow China’s lead, negotiations could start on implementing a phase-out. That process is likely to take years.

What’s still unclear is whether Congress would have to ratify the change to the protocol. There has been little appetite in Congress for climate legislation — especially among Republicans.

The administration official said he believes such a change would have to go back to Congress. Waxman said he thinks it can be accomplished under the existing protocol. Cardin said he didn’t know.