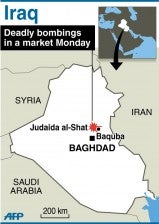 BAGHDAD—A wave of violence, mostly in Sunni areas of Iraq, killed at least 70 people on Monday, shattering hopes that tensions had been eased by a recent series of symbolic political gestures.

The attacks, which left more than 230 people wounded, are the latest in a surge in bloodshed that, coupled with a long-running political paralysis, has stoked fears of a revival of the all-out sectarian war that blighted Iraq in 2006 and 2007.

No group immediately claimed responsibility for the bloodshed, but Sunni militants linked to Al-Qaeda have in the past set off coordinated nationwide bombings in a bid to undermine confidence in the security forces and the Shiite-led authorities.

They have also targeted fellow Sunnis, ostensibly in a bid to provoke retributive violence against Shiite Muslims, whom Al-Qaeda’s front group regard as apostates.

“We have received many corpses,” said Anwar al-Juburi, a doctor at Mosul General Hospital.

“Most of them were members of the security forces.”

Authorities declared a curfew in the northern city in the aftermath of the violence.

Attacks near Saddam Hussein’s birthplace of Owja, the town of Dour and in Taji—all predominantly Sunni areas—meanwhile left a further 13 people dead.

Ten more people were killed in violence in the northern province of Kirkuk and the nearby towns of Tuz Khurmatu and Suleiman Bek.

The towns, which are mixed between Sunni Arab, Kurdish and Turkmen populations, are seen as a tinderbox because they are part of a swathe of territory claimed by the central government and the autonomous Kurdish region.

Blasts in the mixed town of Madain and a mostly Shiite neighborhood of Baghdad killed five more people.

Earlier on Monday, two car bombs and a suicide attack—all of which went off almost simultaneously—in a wholesale fruit and vegetable market in the town of Judaida al-Shat in restive Diyala province killed 13 people.

“Al-Qaeda is behind this terrorist attack,” Mohammed al-Zaidi, a vegetable vendor wounded in the bombing in the mostly-Shiite town told AFP, adding the extremist group was trying to “sow religious hatred in our region, as we live peacefully with the Sunnis.”

The unrest comes amid a surge in attacks in Iraq, with violence in May pushing the month’s death toll to its highest level since 2008.

There has been a heightened level of attacks since the beginning of the year, coinciding with rising discontent among the Sunni Arab minority that erupted into protests in late December.

The UN envoy to Iraq, Martin Kobler, has warned the violence is “ready to explode.”

In a bid to ease tensions, Prime Minister Nuri al-Maliki has in recent days met with two of his arch rivals—the Sunni speaker of parliament and the president of the autonomous Kurdish region.

While the country’s top politicians have pledged to address persistent political disputes, no tangible moves have yet been announced.

Authorities have trumpeted limited efforts to placate demonstrators’ demands, but analysts say a failure to address underlying grievances has fueled months of protests among Iraq’s Sunni community and given militant groups fuel and room to maneuver.

And little in the way of landmark legislation has been passed since 2010 parliamentary elections, with diplomats and officials voicing worry the deadlock is likely to persist until fresh polls due next year.—Prashant Rao