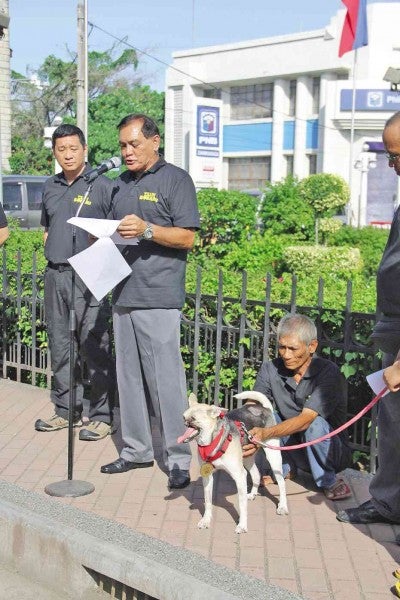 ZAMBOANGA CITY—Every dog has its day, but only few receive a guaranteed supply of dog food for a year and fewer still are honored with the title of “Ambassador” and a motorcade to boot on their return home.

Three-year-old Kabang, who lost half her face after jumping in front of a motorcycle to save the lives of two girls, received a rousing welcome here on Monday after monthslong treatment at the University of California (Davis) veterinary hospital.

After a brief visit to City Hall where Mayor Celso Lobregat signed an executive order declaring Kabang an “Ambassador of Dogwill” and where she was given a bag of treats, the dog was placed at the back of a balloon-decorated pickup multicab for the motorcade.

About 25 vehicles and 75 people joined the motorcade.

Residents snapped photos of Kabang and kids petted her.

Kabang’s return meant a reunion with the girls she saved from an accident in December 2011—the owner’s daughter, Dina Bunggal, and cousin Princess Diansing.

“She is not just my friend, she is like a part of our family,” 13-year-old Dina said. “I am very thankful to her, because without her, maybe I will not be alive today.”

In 2011, Kabang, then aged 2 and pregnant, became a local hero after she jumped in front of a motorcycle in what the Bunggal family claimed was a deliberate act to save Dina and Princess—both crossing a busy road—from being hit by the motorcycle.

Monday’s motorcade will be Kabang’s last public event for the time being. Anton Lim, a private veterinarian, said the dog was still suffering from jet lag.

“We are sequestering her for the whole week. There will be no public appearances and, with permission from Manong Rudy, she (Kabang) will stay with us,” Lim said in a press briefing. “Manong Rudy” is Rodolfo Bunggal, Dina’s father.

Lim expects Kabang to be busy this year now that she has been given the title “Ambassador of Dogwill.”

He said most pet owners were not able to join the welcome for Kabang because her arrival coincided with the opening of the school year in private schools.

Lim said his group would help the Bunggal family meet the requirements to be eligible for a government housing unit. But it was not clear if Rudy’s wife, Christina, and their daughter Dina, would live together again as a family.

Christina has left Rudy, saying she got fed up with his drinking problem and physical abuses. She has taken Dina with her as well as Kabang’s offspring, JR.

The Care for Kabang Foundation has raised cash donations, of which $27,000 was spent for the dog’s surgery and medication.

“It’s in a trust bank in the United States and we will close the donation portal in two weeks,” Lim said. “Everything will still be subject to taxes and whatever extra there is will go to Kabang and the advocacy.”

Lim could not say how much would be left of the donations. He said his group was helping the Bunggals get a new home, at least for the sake of Kabang.

“I leave everything to Doctor Anton. Whatever he thinks is good for Kabang, we will respect that,” Rudy said. He said a complete set of vulcanizing equipment would help him start anew.

Christina, who sells cigarettes and candies for a living, said she would welcome livelihood assistance.

Rudy said: “If I need to work double time, I will do that so I can provide for Kabang. I am grateful that some companies are now sponsoring Kabang’s food.” He was referring to the dog food firm Pedigree’s commitment to supply Kabang food for a year.

“It’s renewable every year so Manong Rudy no longer has to worry about Kabang’s food,” Lim said, adding, “We are always here if Kabang needs medical assistance. Our clinic is always open.”

“The dog was always subjected to maltreatment,” she said. “Look at JR’s teeth. Some are missing. He was hit by something hard. He had skin problems. I took him from Rudy and brought him to my house.”

She also told the Inquirer that Rudy, in the past, had butchered dogs for their meat, which he and his companions ate as “pulutan” (bar chow) in their drinking sessions. Rudy admitted in past interviews that he was a dog meat-eater.

Kabang delivered six puppies last year before she underwent treatment, but five did not survive.

In the United States, Kabang was first treated for heartworm and an infectious cancer known as transmissible venereal tumor before she underwent surgery to close the open wound brought about by the snapping off of her upper snout.—With a report from AP