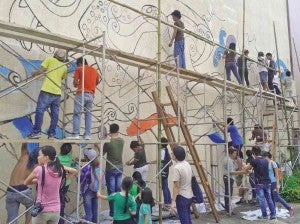 PUERTO PRINCESA CITY— Renowned artist AG Saño and about 50 local volunteers collaborated on Sunday on a mural on the outside wall of a three-story building at  the center of the city to commemorate the 25th anniversary of the Tubbataha Reefs, the country’s largest marine protected area and a UN-inscribed World Heritage Site.

The public painting, which also coincided with the international celebration of Coral Triangle Day, was attended by marine park officials led by park superintendent Angelique Songco and students from various schools.

“Not all of us have been to Tubbataha and this is a perfect way to directly contribute to raising awareness about its importance as a marine resource,”  Saño said.

The mural was painted on the wall of TTH Building along Rizal Avenue in downtown Puerto Princesa City. Saño worked on the outline of the mural to start the public painting event, then led the local artists and volunteers in completing the painting on a rainy Sunday afternoon.

Saño is an artist who is passionate about volunteerism and the marine environment. After watching “The Cove,” a documentary about the annual slaughter of 23,000 dolphins in Taiji, Japan, the former landscape architect quit his job to paint murals around the Philippines, raising awareness about  the plight of dolphins.

A key aspect of his murals is working with volunteers and communities. He draws the outline of the design and volunteers help him complete the rest of the artwork. Community involvement in Saño’s murals gives his art greater meaning and impact.

The Coral Triangle refers to a triangular area encompassing portions of the tropical marine waters of the Philippines, Indonesia, Malaysia, Papua New Guinea, the Solomon Islands and Timor-Leste.

The Coral Triangle is home to 30 percent of the world’s coral reefs, 75 percent of coral species and almost 3,000 species of fish. Ocean currents carry larvae from the Coral Triangle  to other parts of the world supplying the globe with marine resources. It is the geographic center of global marine biodiversity and an international priority for conservation.

Only 1 percent of reefs in the Coral Triangle region are considered effectively managed. Among these are 25 marine protected areas (MPAs) in  the Philippines, including Tubbataha Reefs Natural Park. Tubbataha Reefs have been recognized as one of the best managed MPAs in the western Coral Triangle.

Coral Triangle Day is celebrated on June 9 each year, in conjunction with World Oceans Day (June 8). It is a massive celebration of the world’s epicenter of marine biodiversity. Beach cleanups, sustainable seafood dinners and exhibitions, bazaars and beach parties, all these events carry the message of ocean conservation under the overall banner of “shared waters, shared solutions.”