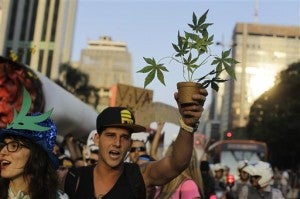 A demonstrator chants slogans as he holds up a potted marijuana plant during a march in favor of the legalization of marijuana in Sao Paulo, Brazil, Saturday, June 8, 2013. (AP Photo/Nelson Antoine)

Military police said there were around 1,000 demonstrators, while organizers of the march claimed ten times that number.

“Brazil is very late. In many countries, marijuana use is allowed, but here we have these reactionary policies. Today we would say that drugs do not kill, what kills is the war on drugs,” march organizer Carol Ribeiro told AFP.

Police said one young man was arrested on suspicion of using illicit substances.

Brazil is considered one of the world’s largest consumers of crack, a highly addictive, low-cost derivative of cocaine. It is estimated there are around a million crack users among the 194-million-strong population.

Major cities like Rio de Janeiro and Sao Paulo have launched policies of mandatory detention for drug addicts, especially those addicted to crack.

The Latin American country does not produce the drugs consumed there — most of the marijuana comes from Paraguay, while the cocaine enters from Bolivia, authorities said.