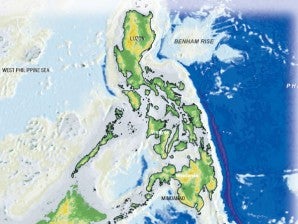 BENHAM’S RICHES The Philippines is the only claimant to 13 million hectares of an undersea region that contains huge natural gas deposits.

The Philippines will gain 13 million hectares in additional territory, an area slightly smaller than Luzon, should the United Nations approve next year the government’s claim on a region off the coast of Isabela and Aurora, Environment Secretary Ramon Jesus Paje said on Monday.

Paje said the undersea region, called Benham Rise, could turn the Philippines into a natural gas exporter because of the area’s huge methane deposits.

Studies conducted by the Department of Environment and Natural Resources (DENR) for the past five years indicate large deposits of methane in solid form, Paje said after a Senate budget hearing.

The government is only awaiting a formal declaration from the UN Convention of the Law of the Sea (Unclos) that Benham Rise is on the country’s continental shelf and therefore part of its territory, Paje said.

Once the Unclos establishes that Benham Rise is part of the Philippines, “we would have legal basis to enter into exploration agreements with private companies to explore… (the area’s) resources,” said Sen. Franklin Drilon, chair of the chamber’s finance committee.

Drilon said a favorable Unclos declaration would mean “increasing our territory from present 30 million hectares to possibly 43 million” with the inclusion of Benham Rise.

Paje said there was no reason for the Unclos committee not to issue a decision favorable to the country “since we are the only claimant, unlike in the western side (where the Spratly Islands are).”

“We have submitted a claim under (Unclos) sometime in late 2008. We got a reply from the UN lately (asking us) to answer some questions. They intend to pass a resolution sometime in mid-2012 to approve our claim (that it is) part of the Philippine continental shelf,” Paje told reporters after the hearing.

Records showed that the Philippines officially submitted a claim with the UN Commission on the Limits of the Continental Shelf in New York on April 8, 2009.

Hilario Davide, then Philippine ambassador to the United Nations, filed the country’s partial submission with the commission.

The United Nations says the continental shelf is “the seabed and subsoil of the submarine areas that extend beyond its territorial sea” up to 370 km (200 nautical miles) from the archipelagic baseline. An extended continental shelf goes farther than 370 km.

The Philippines claims that Benham Rise is an extension of its continental shelf.

The environment secretary said an American geologist surnamed Benham discovered the area that was between 40 and 2,000 meters below the waterline in 1933.

He said gas deposits in the area would enable the country to achieve energy sufficiency.

“Benham Rise is very relevant because of its gas deposits (which has been) confirmed particularly by (the) National Mapping Resource Information Agency. It has given us the data that (the area) contains solid methane. We have not explored it but we have found nodules of methane in the surface and this is very important to us,” he said.

The Kalayaan Island Group, which is part of the disputed Spratly Islands and Scarborough Shoal, both located in the West Philippine Sea (South China Sea) and claimed by the Philippines, are also believed to contain oil and natural gas.

Paje said there was the possibility that the country could export gas in the future.

The secretary added that there would be a demand for gas deposits in Benham Rise “because it’s much cleaner than (other) fossil fuels.”

The DENR formally submitted its proposed P16.99-billion budget for 2012 to the Senate finance committee.