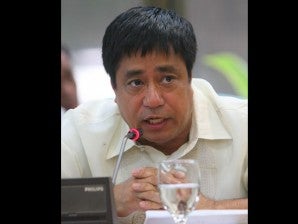 Lawmakers on Monday castigated Bureau of Customs officials over the alleged smuggling of hundreds of container vans filled with household goods, plastic resins and building materials, resulting in the loss of P230 million in potential government revenues.

At a hearing of the House of Representatives, the legislators claimed most of the items were diverted to the country’s fastest growing retail chain, Puregold, and other retail stores without the necessary duties being paid on them.

“A report given to me by reliable sources states that a Boy Valenzuela facilitated the loss or smuggling of the 1,910 containers and that he delivered a bulk thereof to Puregold,” said Ilocos Norte Rep. Rodolfo Fariñas, who chaired the six-hour hearing of the House ways and means committee.

Fariñas did not identify who his “reliable sources” were.

Customs Commissioner Angelito Alvarez told the Inquirer his office had yet to gather sufficient evidence on the allegations of smuggling but that an intensified investigation was under way.

In a statement, Puregold strongly denied it was involved in buying items from the missing containers.

“All business transactions of Puregold are based on completely legal and aboveboard procedures,” it said. “The company has built its good name and reputation on the pure hard work and efforts of its officials and employees and we decry any insinuation that would tarnish that reputation.”

Puregold also disavowed connection with anyone involved in illegal activity.

Fariñas said it was obvious that Puregold (which has 60 outlets nationwide) and possibly another member retail chain, S&R, had the existing network to unload those items immediately into the market.

At a base rate of P120,000 per container van, Fariñas said the government lost roughly P230 million in potential revenues from the “lost” merchandise. Zambales Rep. Milagros Magsaysay placed the lost duties at P3 billion.

Forty-nine percent of the container vans were in the name of LCN, 23 percent in the name of Sea Eagle Trading and 28 percent under Moncelian, lawmakers said.

The goods were supposed to have been shipped from the Port of Manila and the Manila International Container Port (MICP) to the Port of Batangas in the first five months of the year.

Gunigundo said Alvarez and his deputy commissioners had a lot of explaining to do for allegedly ignoring the red flag raised by Batangas District Collector Juan Tan, who was supposedly surprised by an unusual number of container vans that did not reach their destination from January to May this year.

Gunigundo said that smuggling was happening “right under their noses” as officials failed to implement security measures to prevent the purported diversion, such as mandatory X-ray surveillance and computerized monitoring.

Gunigundo was particularly incensed when District Collector Rogel Gatchalian of the Port of Manila said the goods were released from Manila to Batangas without a bond since they were being accompanied by customs security personnel.

Oriental Mindoro Rep. Reynaldo Umali, a former customs official, said during the hearing that the real name of “Boy Valenzuela” was Elvinario Valenzuela, a resident of Taguig City, who—Umali alleged—amassed a fortune over a short period.

Umali claimed Valenzuela had built a resort in Silang, Cavite (called “Hacienda Elvinario”); owned a yacht; and purchased a fleet of expensive cars, such as a Porsche Boxter, Hummer H2, Nissan Patrol, and Toyota Hi-Ace Grandia.

Umali said Valenzuela should be summoned to the hearing.

The lawmaker alleged that Valenzuela and his group were apparently working with well-entrenched customs operations personnel “who knew the loopholes or weak points in the transshipment route of imported goods.”

During the hearing, Magsaysay revealed that another 1,400 containers were found to be missing while in transit from the MICP to the nearby Port of Manila from January to May this year.

“In the bureau’s 100-year history, this must be a record for the bureau to have lost that so [many] goods in such a short amount of time,” Magsaysay said.

He said the customs bureau had registered a P22-billion shortfall in its collections in the first six months of this year.

In a phone interview, Alvarez said he had called for a joint investigation with the Bureau of Internal Revenue (BIR) to dig into the smuggling allegations.

“We will do an audit together with the BIR,” Alvarez said.

He hinted dismay over allegations by legislators that smuggling was happening right before the eyes of customs officials.

He said the reports of smuggling were still unsubstantiated and that insinuations of under-performance by customs officials were unfair.

“Congressmen just say what they want to say, but right now the [smuggling] report is still hearsay. At this time, it has not been validated yet,” Alvarez said.

But he said the customs bureau would not take the allegations sitting down and would make a thorough investigation.