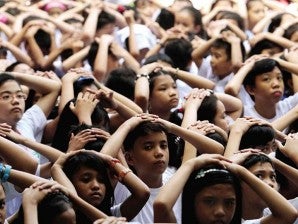 Coping with emergencies is among the first lessons schoolchildren learn in a country regularly hit by natural and man-made disasters. Students of Baclaran Elementary School Central in Parañaque City cover their heads with their hands after evacuating their school building during an earthquake drill on Friday. NIÑO JESUS ORBETA

MANILA, Philippines—If a major earthquake hits Metro Manila, 38,000 people will be killed within the first hour, more than 100,000 will be injured, and the area along Diosdado Macapagal Boulevard in Pasay City will be turned into a mass grave.

These were some of the grim scenarios that Metropolitan Manila Development Authority Chairman Francis Tolentino told the Philippine Medical Association in a closed-door meeting Tuesday on the agency’s earthquake preparations.

“We have learned from Chairman Tolentino some disturbing facts and dreadful scenarios that can happen to us all in the National Capital Region (NCR) in case a powerful earthquake strikes,” said PMA president Leo Olarte.

“And because of this, we are bent in doing concrete measures to help minimize enormous human casualties resulting from such a calamity,” he added.

The MMDA has drawn up “Oplan Metro Yakal” (OMY), a response plan for a Magnitude 7 or a stronger earthquake which experts say could hit the capital every 200 years.

Olarte said the PMA, the largest association of doctors in the country, could mobilize members in Luzon and NCR as Oplan Metro Yakal volunteers.

“At the moment, we are not asking if this kind of a megadisaster can happen in Metro Manila. Our question now is when will this happen. So far, the little-known 200-year earthquake cycle in Metro Manila has already elapsed, so this nightmare can happen anytime,” Olarte said.

“We need to prepare now and be ready for the worst scenario. That is why we are partnering with the MMDA,” he added.

OMY identified four possible evacuation sites and a temporary mass burial grounds in the aftermath of a killer quake.

He said the reclamation area along Diosdado Macapagal Boulevard in Pasay City will be designated as “a temporary mass burial site.”

“A once-in-200-years earthquake that can hit the Philippines can wipe out 20 percent of Metro Manila. Roads will be made impassable and simultaneous fires will ensue,” Olarte said.

“Within an hour, 38,000 people will be killed and more than 100,000 will be injured. The megaquake will also topple at least 13 percent of the 170,000 residential buildings and will leave 1.2 million people homeless,” Olarte said.

“It can also damage 20 percent of the vital facilities such as hospitals, government centers and schools” he added.