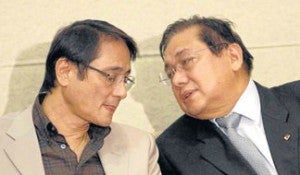 BROTHER’S KEEPER Former First Gentleman Mike Arroyo talks to his younger brother, Rep. Ignacio “Iggy” Arroyo, in this photo taken on Aug. 28, 2006. The brothers are embroiled in another controversy, this time over the anomalous sale of secondhand helicopters to the police. INQUIRER PHOTO

For the second time, Negros Occidental Rep. Ignacio “Iggy” Arroyo has come to his brother’s rescue.

Through his lawyer, the lawmaker presented a document showing that LTA Inc., the family-owned company of the Arroyos, merely leased five helicopters from Lionair Inc. for two months in 2004.

The five helicopters are the subject of a Senate inquiry, which is zeroing in on Jose Miguel “Mike” Arroyo, who reportedly sold two of the choppers to the Philippine National Police (PNP) in 2009 by passing these off as brand new.

“It would seem that Mr. Po has been giving the government the runaround by using different companies owned and controlled by him to avoid taxes and duties and by dragging my brother, Attorney Mike Arroyo, into a scam … in a clear effort to provide a cover and distraction for [his] own fraudulent acts,” Iggy Arroyo said in a three-page statement.

His statement was read by his lawyer, Andresito Fornier, who provided reporters a copy of the lease service agreement between Lionair and LTA Inc. covering the use of the five helicopters.

Fornier said his client was seeking treatment in London for an unspecified liver condition. Iggy left about two weeks ago and would return when his doctors allow him.

Iggy said that he was the president of LTA Inc. when the lease agreement was signed with Lionair and that his elder brother “was not part of our company during those material dates.”

The congressman said his brother divested himself of his shares in LTA Inc. on March 15, 2001, weeks after an uprising toppled the presidency of Joseph Estrada.

Fornier said Mike reacquired shares in LTA Inc. only in November last year, buying a sizable portion to become its president. Iggy is still a board member, the lawyer added.

It was the second time Iggy took responsibility for something being ascribed to his brother.

In 2003, Iggy claimed a bank account under the name of Jose Pidal, which at that time was being pinned on Mike Arroyo, as his own.

Lacson accused Mike of amassing more than P200 million from campaign contributions for his wife and putting the money in the accounts.

Iggy’s claim on the ownership of the choppers runs counter to the allegations of Po.

Po said under oath that he sold five Robinson R-44 Raven I helicopters to Mike in late 2003 so the latter’s wife could use these in her presidential campaign in 2004.

Po said he was asked to sign a blank deed of assignment after Mike completed payments for the choppers.

He said two choppers were still in the Lionair hangar in Pasay City as the two others had been sold to the PNP. A fifth helicopter crashed in 2007.

Mike has denied ownership of the five choppers and filed perjury charges against Po. Arroyo was a no-show at the Senate blue ribbon committee hearing last week, citing poor health.

Fornier said Mike “had nothing to do with the helicopters.”

“The only Arroyo who had anything to do with helicopters was LTA Inc. and Iggy Arroyo who leased it from the owner … [who was] Archie Po,” the lawyer pointed out. “What’s wrong with leasing the helicopters?”

He showed the Inquirer an aircraft fleet-service agreement that named Lionair the lessor, and LTA Inc., the lessee of the helicopters from March 16, 2004, to May 15, 2004.

The cost of the charter for the five helicopters was pegged at P9.8 million, according to the lease agreement. Both parties agreed to a 25-percent advance payment after the signing of the contract, and the same amount was to be paid every 15 days until the end of the lease agreement.

The contract was notarized by Lope Velasco on March 16, 2004, in Makati City.

Fornier also released a certification from Velasco declaring that a portion of the notary public acknowledgment had a typographical error.

The residence certificate of the Lionair corporate secretary, Renato Sia, who signed the document on behalf of the company, was dated April 2, 2004, instead of March 2.

Senate President Pro Tempore Jose “Jinggoy” Estrada maintained that the Senate had enough evidence against Arroyo that would stand in court, citing testimonies of Po and of a representative of Manila Aerospace Products Trading (Maptra).

Po claimed that he personally delivered at the LTA building $700,000 to Mike, who passed on the sum to his secretary, Rowena del Rosario.

The delivery, Po alleged, was made a few days after the PNP purchased two preowned helicopters.

Estrada said another evidence was the testimony of Lionair collections agent Edith Solano-Juguan. She said she regularly collected monthly P350,000 in maintenance fees that was paid in cash by Del Rosario.

Fornier said Iggy was taking his brother’s crisis seriously. If not for his liver condition, the lawmaker would have personally delivered the statement himself, the lawyer said.

Asked what took Iggy a while to come out in his brother’s defense, Fornier said his client might have been advised by his doctors not to stress himself while under treatment.

“But you know, a brother being a brother, he called me and said what he was about to do wasn’t cleared [by doctors] but he needed somebody to speak for him, and I said ‘OK,”’ Fornier said.