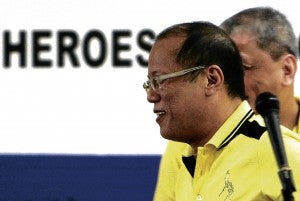 Public satisfaction with the Aquino administration remains “very good” despite a drop in its ratings from the last quarter, a recent Social Weather Stations (SWS) survey has found.

Results of the first-quarter SWS poll conducted between March 19 and 22, and first published in the Business World newspaper, showed that 68 percent of the respondents were satisfied while 15 percent were dissatisfied with the government’s performance.

This resulted in a net +53 rating (percent satisfied minus percent dissatisfied), four percentage points down from +57 recorded in December last year.

But while the results slid from the previous quarter’s, it is still “higher than those of all previous administrations,” the SWS said.

The Aquino administration’s satisfaction scores have ranged from the +64 record in September and November 2010 to a low of +44 in May 2012. The record high for a previous administration was a +36 during the Estrada presidency.

Secretary Hermino Coloma, head of the Presidential Communications Operations Office, said he was not surprised by the latest SWS survey showing a slight dip in the President’s public satisfaction rating.

“No, it is not a significant decline as it is barely outside the usual margin of error of plus/minus three percent,” said Coloma in a text message.

“We are aware of our people’s expectations for improved quality of life and we are determined to push through with poverty reduction and social development programs,” he said.

Compared with the survey last December, the administration’s net satisfaction ratings fell by 21 points in the Visayas from a “very good” +66 to a “good” +45. It also dropped by 4 points but stayed “good” in Metro Manila from +47 to +43.

The “very good” results for Luzon outside Metro Manila (+54) and Mindanao (+63) were unchanged.

Satisfaction ratings dropped among all socioeconomic groups, but were still considered “very good.”

SWS also asked respondents if they were satisfied with the administration’s performance on specific issues.

Of the 17 issues tested, the administration scored “very good” on two, “good” on seven, “moderate” on four, “neutral” on three, and “poor” on one.

The government scored “very good” in helping the poor (+56), and promoting the welfare of overseas Filipino workers (+50).

The administration obtained “moderate” scores for reconciliation with communist rebels (+28), eradicating graft and corruption (+19), fighting crimes (+17), and resulting the armed conflict in Sabah (+13).

The Aquino administration recorded “neutral” scores on ensuring that no family will be hungry (+7), fighting inflation (+4), and ensuring that oil firms do not take advantage of oil prices (+4).

The administration scored “poor” in resolving the Maguindanao massacre with justice (-26).

The latest SWS survey was conducted using face-to-face interviews with 1,200 adults nationwide. It had a margin of error of plus-or-minus 3 percentage points. Inquirer Research and Michael Lim Ubac