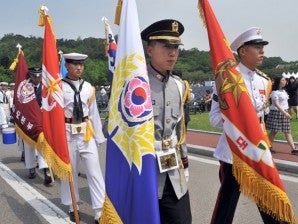 South Korean honor guards march with flags after a ceremony marking Korean Memorial Day at the National Cemetery in Seoul on June 6. AFP

SEOUL—North and South Korea agreed in principle Thursday to hold their first official talks for years, signalling a possible breakthrough in cross-border ties after months of escalated military tensions.

A surprise offer from Pyongyang proposed discussions on a range of commercial and humanitarian issues from reopening a joint industrial complex to resuming cross-border family reunions.

The South replied within hours, with the Unification Ministry saying it viewed the offer “positively” and would announce a date, venue and agenda later.

“We hope that South and North Korea can build trust through this opportunity,” the ministry added.

Analysts welcomed the development but some advised caution, saying the precise nature and agenda of the dialogue might create insurmountable sticking points.

“I think this is an attempt by the North to seize the initiative, but it’s premature to say whether the offer is likely to lead to a sincere dialogue,” said Yang Moo-Jin, a professor at the University of North Korean Studies in Seoul.

Official contacts between Seoul and Pyongyang have been essentially frozen since South Korea accused the North of torpedoing one of its warships in March 2010 with the loss of 46 lives.

April and May this year saw tensions soar to worrying levels as the North, angered by joint South-US military drills and UN sanctions imposed after its nuclear test in February, threatened pre-emptive nuclear strikes.

The situation has calmed in recent weeks, with both sides circling warily around the idea of opening some sort of dialogue.

The North’s proposal, carried in a statement from the Committee for the Peaceful Reunification of Korea (CPRK), said the venue and date for talks “can be set to the convenience of the South side”.

Initial subjects for discussion would be the Kaesong joint industrial zone, which was closed at the height of the recent tensions, and the resumption of cross-border tours to the North’s Mount Kumgang resort, the CPRK said.

Humanitarian issues such as reuniting family members separated after the 1950-53 Korean War could also be discussed.

The CPRK said a positive response would see the North consider rolling back measures it took when relations went into a tailspin in April, including restoring a cross-border hotline.

South Korea had already offered working-level talks on Kaesong and Seoul is likely to be wary of agreeing to a much wider-ranging agenda.

While President Park Geun-Hye has spoken of the need for dialogue, she has made it clear — with US backing — that substantive talks would require the North to show commitment to abandoning its nuclear weapons programme.

Pyongyang has repeatedly insisted that its nuclear deterrent is not up for negotiation.

“There could be some trouble in setting the agenda, and it’s natural to doubt North Korea’s sincerity,” said Paik Hak-Soon, an analyst at the Sejong Institute think-tank in Seoul.

“But this a typically strategic change of direction by the North, which puts the ball in the South’s court and I think it presents a genuine opportunity,” Paik said.

The Kaesong complex, established inside North Korea in 2004, was the most high-profile casualty of the recent tensions.

Born out of the “Sunshine Policy” of inter-Korean reconciliation initiated in the late 1990s by South Korean president Kim Dae-Jung, Kaesong was a crucial hard currency source for the impoverished North, through taxes and revenues and its cut of workers’ wages.

Operations at the complex ground to a halt after the North pulled all its 53,000 workers out in early April. The South withdrew its managers and officials soon afterwards.

The Mount Kumgang resort, developed by the South’s Hyundai Asan company, opened in 1998 as a symbol of reconciliation. It once earned the North tens of millions of dollars a year.

But Seoul suspended tours by its citizens after a North Korean soldier shot dead a South Korean housewife there in July 2008. In response the North scrapped a deal with Hyundai Asan and seized its properties there.

Hundreds of thousands of family members were separated by the Korean War, and the last temporary reunions, arranged by the two Koreas’ Red Cross authorities, took place in 2010.

Nearly 80,000 people in the South alone are on the waiting list for reunions should they be resumed.