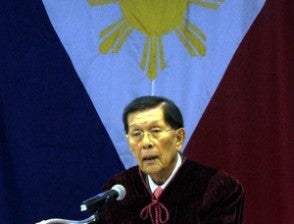 Sen. Juan Ponce Enrile resigned as Senate President on Wednesday after attacking colleagues who, he said, had conducted a hate campaign against him that eroded public trust in the chamber and affected his son’s senatorial bid.

The resignation was announced in a privilege speech on what was supposed to be the last day of the 15th Congress. Senators on Wednesday night decided to extend the session until Thursday before adjourning sine die.

Senate President Pro Tempore Jinggoy Estrada took over Enrile’s post and will serve in an acting capacity until the 16th Congress convenes next month.

Sen. Franklin Drilon of the Liberal Party (LP), a member of the administration Team PNoy which won nine of the 12 Senate seats in the May 13 elections, was widely expected to be elected the next Senate President.

Enrile, who still has three years left of his six-year term and is likely to become minority leader in the next Congress, singled out Senators Alan Peter Cayetano and Miriam Defensor-Santiago, without naming her, as the detractors who had succeeded in eroding the image of the Senate in their struggle to malign him.

“No less than the son of my former (law) partner, the late Sen. Renato L. Cayetano, would dare accuse me of being a thief or a scoundrel,” Enrile said.

“A noncandidate senator who fashions herself as my nemesis and who evidently delights in doing the job” was the other author of “virulent personal attacks against me,” Enrile said, obviously referring to Santiago.

Enrile also chided Budget Secretary Florencio Abad for announcing that Drilon would soon replace him and that Speaker Feliciano Belmonte Jr. would be retained as leader of the House of Representatives.

His voice shaking, Enrile dared all senators to individually account to the people how they used their annual budgets.

The challenge stemmed from complaints aired early this year by Santiago and Cayetano about Enrile’s selective distribution of additional maintenance and other operating expenditures (MOOE) totaling P1.8 million and a P250,000 cash bonus to 18 senators in December.

Excluded from the funds issued by the Office of the Senate President were Santiago, Cayetano, Sen. Pia Cayetano, Sen. Antonio Trillanes IV and Enrile himself.

Santiago and Alan Cayetano were very vocal in their criticism of Enrile’s move that time.

Cayetano and Enrile even had a verbal tussle on the session floor after the younger senator delivered a speech scrutinizing the Senate’s steadily increasing budget from the time Enrile became Senate President in November 2008.

“I will leave each of my colleagues to explain directly to the people who elected them … to account for their own budgets as I have always been ready to account for my own. I can no longer speak for them. I refuse to be anyone’s scapegoat and every one’s whipping boy,” Enrile read from a written statement. “I refuse to let any senator drag my name down to the gutter.”

‘My heart bled for him’

Enrile said his son, Cagayan Rep. Jack Enrile, might have lost in the last senatorial elections as a result of the adverse public opinion following the MOOE controversy.

He said the “common analysis of observers” showed Jack’s candidacy “suffered from fallout and bitter criticism hurled against me by those I displeased” just as the senatorial campaign was about to take off early this year.

Enrile said he “endured in silence the pain of seeing my son suffer because of me. He carried on his shoulders the weight of all mud thrown at me as I stayed and watched quietly on the sidelines. My heart bled for him.”

He said the reelection of Cayetano and of Sen. Antonio Trillanes IV, with whom he had a very public quarrel on topics ranging from the bill dividing Camarines Sur to the Chinese intrusion at Scarborough Shoal, would only aggravate his situation as Senate President.

“With the cloud of doubt and suspicion that adversaries have successfully hoisted upon my person, my honor and leadership, it is not farfetched for them to make people believe I will expend resources of the Senate, the people’s money and use of the powers of the Senate president just to hold on to this position,” he explained.

“I say successfully because no matter how baseless and malicious those accusations are or were, the issues hurled against me and their implications not only on my own but on the Senate’s integrity were never resolved,” Enrile said.

He said his detractors not only succeeded in maligning him, the public’s trust in the chamber suffered as well.

“I carried the whole brunt of the public’s ire over the one-page certification—the prevailing system of liquidation of the budget of senators which was neither my creation nor my invention,” Enrile said, referring to the requirement for all senators in liquidating their expenses.

Enrile said that while he and Sen. Panfilo Lacson, chairman of the accounts committee, agreed publicly to revert to the “old system of liquidating and accounting each centavo,” the rest of the senators kept their distance, “save for a few colleagues … as I was publicly pilloried and crucified.”

Still, Enrile pointed out that public outcry over the manner by which funds were liquidated did not deter some colleagues from expressing concern on how this would affect the continued operations of their offices and their future budget allocations.

He said he also took the blame for the huge spending of various oversight committees mandated either by law or through Senate resolutions.

“Truth is, these committees operate and spend funds autonomously yet I was left alone as (Cayetano) questioned the increasing budget of the Senate from the time I assumed the Senate Presidency in November 2008,” he recalled.

“Senator Drilon as chair of finance committee knows only too well how the apportionment of chairmanships over these oversight committees can be a real headache for any Senate President. He was the first one to call my attention to it at the beginning of this Congress,” Enrile said.

“Next was Sen. Pia Cayetano who offered to review and study the rationalization of these preponderant oversight committees. I welcomed her offer to help, but I did not get any recommendation from her,” he added.

“I directed Drilon and Lacson to be in charge of the review following the numerous requests for budget augmentation I received. With the way the oversight committees were being presented as a form of entitlement, it was impossible for me to satisfy everyone.

“Perhaps in due time, Senator Drilon will finally find the solution that will adequately satisfy the members of this chamber. More importantly, I hope such solution would correct a rather unwieldy situation that has earned the criticism and disgust of the people,” Enrile said.

Cayetano remained adamant that Enrile should explain how to liquidate the P250,000 given each senator during the Christmas season last year.

“I cannot accept that P250,000 [of the Senate’s funds] could be given away and then leave it to each senator how to liquidate it,” Cayetano told reporters.

He added that the defeat of Enrile’s son should not be blamed on the issues raised against the Senate President.

“By resigning, he has not answered the issue. There are more questions now,” Cayetano said.

Trillanes, who openly campaigned among his colleagues for Enrile’s ouster even before, accepted Enrile’s challenge for an audit of every senator’s expenses. “If there’s an office that needs to be audited, it’s his office. If he wants an audit, then so be it. We will do that.”

He said Enrile just preempted his ouster. “It’s more of a theatrical move than anything else,” he said. “It was not a graceful exit. It was inevitable that he would be replaced. Let’s move on.”

Malacañang said it was respecting Enrile’s resignation, even as it acknowledged his role in maintaining the Senate’s independence and recognized his future role in the 16th Congress.

“For 1,661 days, or four years, six months and 19 days, Juan Ponce Enrile served as president of the Senate, the third-highest position in the Republic. Today, he irrevocably relinquished that position. We respect his decision,” President Aquino’s spokesman, Edwin Lacierda, said in a statement.—With reports from TJ A. Burgonio and Norman Bordadora