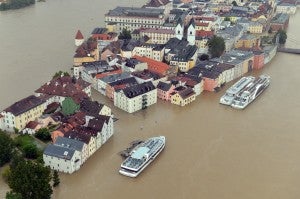 An aerial view of the flooding in Passau, Germany, photographed Monday June 3, 2013. Heavy rainfalls cause flooding along rivers and lakes in Germany, Austria, Switzerland and the Czech Republic. AP FILE PHOTO

PARIS — Less than three months after being battered by snow and ice, central Europe now finds itself fighting floods — and some scientists are pointing the finger at human interference with the climate system.

Leading the charge is the Potsdam Institute for Climate Impact Research (PIK) near Berlin, which says a low-pressure system that dumped the rain was locked into place by a disturbance with a global wind pattern.

“We think it is linked to the current drought conditions in Russia as well,” Stefan Rahmstorf, PIK’s professor of ocean physics, told AFP.

Normally, air moves around the mid-latitudes of the planet in the form of waves, oscillating irregularly between the tropics and the poles, Rahmstorf explained.

The main force behind this movement is the big temperature gap between the frigid Arctic and the warmer southerly latitudes. Like a pump, this differential helps to force air northward or southward.

The problem, though, is that the Arctic is steadily warming — last year, its summer sea ice hit its lowest extent on record — so the temperature difference is declining.

As a result, according to the theory, the wave movement diminishes. At a certain point, pressure systems stay locked in place, causing a weather pattern that persists wretchedly.

“This planetary wave resonance is not a local effect but spread around the whole (northern) hemisphere,” said Rahmstorf in an email exchange.

When a “resonance” episode occurs, half a dozen peaks and troughs of high or low pressure form around the hemisphere. This explains why some parts of the world become unseasonably hot or cold and others unusually dry or rainy, said Rahmstorf in an email exchange.

More and more of these events have been occurring since 2003, coinciding with higher temperatures and widening Arctic sea ice loss, Rahmstorf said. Current data from weather satellites point to a repeat of this episode, he added.

But it has met resistance among experts who are leery about associating a single extreme-weather event today — or even several — with climate change, which is considered a longer-term phenomenon.

“To confirm the exact role played by climate change in flooding trends in past decades, it would be necessary to have more reliable, long-term series data for rivers with a natural flow regime,” the European Environment Agency (EAA) cautioned on Wednesday.

It said, though, that as far as the future is concerned, rising temperatures in Europe will accentuate rainfall, “leading to more frequent and intense floods in many regions.”

According to a probe by European hydrologists, around a fifth European cities with a population of more than 100,000 are very vulnerable to river flooding, a risk that raises questions about how land is used.

Concrete and tarmac ensure that rainfall drains off very quickly into rivers, whose levels may rise swiftly if farmland is already soggy — as was the case in much of central Europe after last March’s snowfalls.

The green group WWF called for a restoration of flood plains, a natural buffer against floodwaters that for decades has been eroded by urbanization and agriculture.

Austria, it noted, was enduring its second big flood in 10 years. Yet each day, the equivalent of around 12 football pitches of Austrian land were being sealed over, especially in river valleys.

“Flood plains are like sponges allowing large volumes of water to be stored and slowly and safely released down rivers and into the groundwater,” said Orieta Hulea, WWF’s conservation director for central and eastern Europe.

“If we cut them off from the main river beds and drain them for agriculture, as has happened on the Lower Danube and across most of Europe for the last century, their potential for flood retention is lost and the risks from floods are increased.”