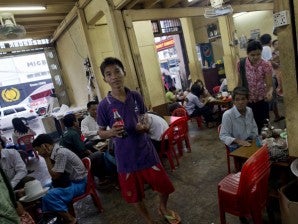 A waiter carries a bottle of Coca-Cola to serve a customer at a tea house in Yangon, Myanmar, Tuesday, June 4, 2013. Hundreds of world leaders and industry chiefs meet in Myanmar Wednesday for Asia’s answer to the World Economic Forum, as the fast-changing nation woos foreign investors after the end of junta rule. Coca-Cola began bottling its famous soft drink in Myanmar on Tuesday as part of a planned five-year, $200-million investment after having no local production for more than 60 years. AP PHOTO/GEMUNU AMARASINGHE

NAYPYIDAW, Myanmar—Hundreds of world leaders and industry chiefs meet in Myanmar Wednesday for Asia’s answer to the World Economic Forum, as the fast-changing nation woos foreign investors after the end of junta rule.

Some 900 delegates from more than 50 countries will meet in Naypyidaw for the World Economic Forum on East Asia—the region’s equivalent of the annual gathering of business and political luminaries in the Swiss resort of Davos.

“This is our show. This is our performance to the world,” Tourism Minister Htay Aung said ahead of the three-day event.

President Thein Sein’s quasi-civilian government has surprised the world since coming to power two years ago with dramatic political and economic changes that have led to the lifting of most Western sanctions.

Hundreds of political prisoners have been freed, democracy champion Aung San Suu Kyi has been welcomed into a new parliament and tentative ceasefires have been reached in the country’s multiple ethnic civil wars.

Rest of political prisoners to be freed

On the eve of the conference, former general Thein Sein said in a radio address to the nation that all remaining prisoners of conscience would soon be freed.

Activists say some 200 political prisoners remain in jail. They have accused Myanmar of using a series of headline-grabbing amnesties for political gain, aware that the international community is watching.

In his speech, Thein Sein insisted the aim of the amnesties was “national reconciliation.”

“There is no other political advantage that we want,” he added.

Both Thein Sein and Suu Kyi are scheduled to address the forum on Thursday.

After years lagging behind its more developed neighbors, Myanmar is now taking steps to revive its impoverished economy.

The currency was floated last year, there are moves to give the central bank more independence and a new foreign investment law has been passed.

Foreign firms are queuing up to enter the country formerly known as Burma. They include Coca-Cola, which is returning to Myanmar after an absence of more than six decades with a new bottling plant opened on Tuesday.

Sushant Palakurthi Rao, Asia head of the WEF, said the Myanmar forum was “by far the largest” meeting of the group.

“I think these numbers are a clear expression of the tremendous interest from all walks of life,” he said.

Several outbreaks of deadly religious violence have also cast a shadow over the reform process.

A handout notice from the forum gives delegates some taste of the business challenges facing the country, noting that there will be no cash machines for international customers, credit cards are not accepted and the 3G network “is not available” for users of BlackBerry and other mobile phones.—Kelly Macnamara