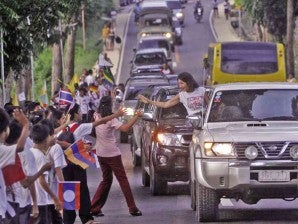 CEBU CITY—It may have helped promote Cebu but the Suroy-Suroy Sugbo tourism program was very costly because the provincial government ended up spending more but earning less, according to the Commission on Audit (COA).

The AOM said the province had yet to pay P67.5 million for the 26 brand-new tourist buses it procured in October 2012 for the program.

The AOM covered four Suroy-Suroy tours in 2012—January, April, June and September—prior to the six-month suspension imposed on Gov. Gwendolyn Garcia in December for grave abuse of authority.

The Suroy-Suroy Sugbo is a tourism program started by Garcia in 2004 with the Cebu Chamber of Commerce and Industry.

It offered a tour of clustered towns and cities in the province that would usually run for two to three days. While it was aimed at pushing Cebu as a tourism hub, the program, critics accused, was used to promote her politically.

The COA’s AOM said the program itself was “laudable” because it promoted Cebu as a prime tourist destination.

But it said the expenses could have been minimized if there was prudence in the disbursement of government funds.

The AOM said the program incurred “unnecessary expenses and extravagant, irregular and excessive expenditures to the prejudice of the local government unit.”

Of the P11.4 million in expenses, P7.9 million was spent on advertising, office supplies, rentals, representation, telephone bills, travel and other maintenance and operating costs.

The COA also said there were more nonpaying participants, especially in June and September.