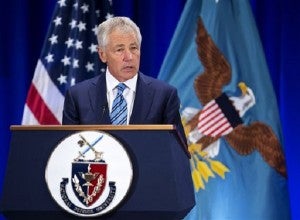 Defense Secretary Chuck Hagel speaks at the National Defense University at Fort McNair in Washington, Wednesday, April 3, 2013. Hagel labeled North Korea’s rhetoric as a real, clear danger and threat to the U.S. and its Asia-Pacific allies. He said the U.S. is doing all it can to defuse the situation, echoing comments a day earlier by Secretary of State John Kerry. AP FILE PHOTO

SINGAPORE – The United States on Saturday offered to host a meeting with Southeast Asian defense ministers in Hawaii next year, stepping up its efforts to counter growing Chinese influence in the region.

US Defense Secretary Chuck Hagel said at a security forum in Singapore that he will first meet his counterparts from the Association of Southeast Asian Nations (ASEAN) at a regional meeting in Brunei this year.

“This weekend, in my meetings here in Singapore, I am extending an invitation to ASEAN defense ministers to meet together next year in Hawaii,” the Pentagon chief said.

“I believe this first-ever US-hosted meeting of ASEAN defense ministers will provide another opportunity for us to discuss a shared vision for a dynamic, peaceful and secure future for the region.”

Four of ASEAN’s 10 member states — Brunei, Malaysia, the Philippines and Vietnam — as well as Taiwan are locked in territorial disputes with China in the South China Sea.

Smaller ASEAN member countries like Laos and Cambodia have come under increasing Chinese economic and political influence, partly as a result of foreign aid from Beijing.

China has been aggressively enforcing its claims over almost the entire South China Sea, including waters and territories near the shores of smaller states, thousands of kilometres away from the Chinese coast.

China’s influence was highlighted during Cambodia’s leadership of ASEAN last year when the group’s foreign ministers for the first time failed to issue a joint communique due to disagreements on how to deal with Beijing on the territorial issue.

Washington also risks being left out on the trade front, analysts have said.

China has a free-trade agreement with ASEAN and is a key player in efforts to widen the pact to include other regional players like Japan, South Korea, India, Australia and New Zealand.

The United States is spearheading rival talks to create a Trans-Pacific Partnership that includes Latin America.