Return of US forces to Subic possible

SUBIC BAY FREEPORT—High-level visits here by American officials have raised the prospect of a return of the United States’ military presence in this former naval base in the wake of disasters that hit Japan, which have delayed the planned US military build-up in Guam. 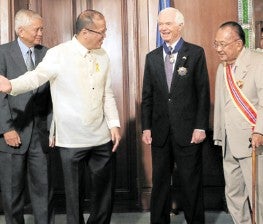 The Philippine Daily Inquirer learned of the visit but was told that it was “not open to press coverage.”

In March, US Ambassador to the Philippines Harry Thomas Jr. also met with local officials and briefed them about the impact of the earthquake and tsunami that hit Japan on the transfer of US military bases in Okinawa to Guam. The visit was not announced to reporters here.

Inouye and Cochran, chair and ranking member, respectively, of the US Senate committee on appropriations, appeared to be interested in the possibility of an increased presence of the US military in the country, a source present at the luncheon meeting for the visiting senators hosted by Subic and local officials told the Inquirer.

The source, who asked not to be named for lack of authority to speak on the matter, said: “Their official reason for being here was to obtain a situationer of developments in the area and to consult with local officials about these. They even brought their technical staff. During the discussion, they were curious about the reception in the country of an [increased presence of the US military] here.”

The source also said the US embassy “gave strict instructions that [the media] not be allowed to cover the visit.”

“Their embassy arranged the logistics of the visit directly with Olongapo City [officials], and not the SBMA,” the source said.

Facilities in the free port that can be used by the US military, like the airport and seaport, are intact, according to the source.

“Even now, they are already using it as part of the VFA (Visiting Forces Agreement). But if they substantially increase their presence here, then the free port can still accommodate them,” the source further said.

Olongapo mayor for US return

Olongapo Mayor James Gordon Jr. said the senators wanted to see the success of the free port, which the Americans left 20 years ago after the Philippine Senate rejected a treaty extending the stay of US military bases in the country.

“They were amazed by what they saw,” Gordon said.

Asked if he would support a return of the US military in Subic, Gordon said: “Of course, we would welcome it. We want two economies here—the one that is free port-based and the other [which relies on support services] to the US military. They can coexist here.”

He said the Guam build-up would be scaled down following the Japan disaster.

“We are open to the possibility that [the US military] might again use the Subic Freeport,” he said.

The US government approved the relocation of its naval base from Okinawa, Japan, to Guam starting 2012. Guam officials have been visiting the Subic Bay Freeport and Olongapo City to learn from the experience of hosting a naval base.

Gordon, however, declined to give details on the discussions about the US military’s possible return to Subic.

“Your guess is as good as mine. Like investors, they come here but initially don’t tell you what [their real plans] are. But if it’s an enhancement of the VFA … that’s already ongoing,” he said.

The US embassy said Inouye was in Manila with Cochran to meet with Philippine officials to discuss issues of bilateral interest.

Inouye is a senior senator from Hawaii and the president pro-tempore of the US Senate. For helping pass the Filipino Veterans Equity Compensation provision of the American Recovery and Reinvestment Act of 2009, he has been hailed by Filipino veterans as their “champion” in the US Senate.

Cochran is a senior senator from Mississippi.

The source said the US senators arrived on a US government jet that landed at about 11:30 a.m. on Tuesday at the Subic International Airport where they were welcomed by local officials.

“Then they went on a tour of the Subic facilities. Specifically, they visited the seaport, and the housing areas in Kalayaan and Binictican, as well as [some other areas],” the source said.

After that, the senators and their entourage and military escorts, proceeded to Lighthouse Marina Resort for a luncheon meeting. The US senators left after the meeting that lasted for less than two hours, according to officials present during the visit.

Gordon said Inouye and Cochran discussed the delays in the transfer of US bases in Japan to Guam.

“[They cited] not only the disaster in Japan as the reason for that, but also the [political turmoil] in Japan. That country has had a change of at least six prime ministers now since [the beginning of talks for the Guam military build-up]. Also, they are now focused on the [reconstruction] of the disaster-hit areas there,” Gordon said.

Outgoing SBMA Administrator Armand Arreza said the possibility of Subic being an alternative site to Guam was “officially not discussed.”

Arreza said Inouye, who last visited the Philippines in 2008 for what the US embassy described as a “learning tour” in Zamboanga City, “was interested about how Subic turned out.”

“They were very impressed because they thought the withdrawal of the US Naval Base would result in [the collapse of the local economy],” he said.

In an earlier interview, Dean Alegado, executive director of the Association of Pacific Islands Local Government Conference, said the disaster that hit Japan “made the fate of the military build-up uncertain, to say the least.”