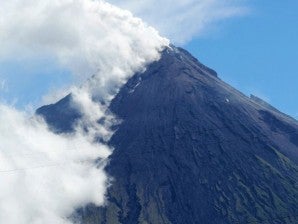 LEGAZPI CITY, Philippines—Disaster authorities in Albay and other Bicol provinces have been warned anew to brace themselves for floods, landslides and mudflow from Mt. Mayon with the onset of the rainy season.

The rainy season will be here next month as indicated by the series of intertropical convergence zones (ITCZs) that produce the low pressure areas (LPAs) and have brought rain to many parts of the country, said Landrico Dalida, regional director of the Philippine Atmospheric, Geophysical and Astronomical Services (Pagasa).

He said the series of ITCZs bringing bands of clouds were experienced mainly in the Visayas and Mindanao, and would continue to prevail in these regions from June to July, but would also affect Bicol as Pagasa has seen a possible rising trend of ITCZs from the Visayas to Bicol.

ITCZ produces the LPAs that are the breeding ground for tropical depressions, storms and typhoons, Dalida said.

Bicol has experienced good weather from January to May despite the three weather depressions (“Auring”, “Bising” and “Crising”) that have hit some areas of the Visayas and Mindanao since January, he said.

“(But) as we assess the series of ITCZ lines, there seems to be a rising trend that it may pass the (Bicol) region. In effect, we expect the rainy days (in Bicol) to begin in June,” Dalida said in a phone interview.

Bicol has been largely spared from the most disastrous weather events since supertyphoon “Reming” hit the region in 2006, said Dalida. But with the rising trend of harmful weather events, disaster authorities in Albay and the rest of Bicol should now start preparing emergency measures, he said.

Pagasa estimates that one to two weather disturbances would occur this June, three to four in July and another three to four in August—all of which would pass Mindanao and Visayas and would affect Bicol, Dalida said.

The onset of the rainy season may trigger landslides, floods and mudflows in the next six months, he warned.

In Albay, Gov. Joey Salceda said the Provincial Disaster Risk Reduction and  Management Council  has put in place a strategic disaster plan that would improve evacuation procedures in times of heavy rain, typhoons and other calamities.

He said the Albay Public Safety Emergency and Management Office (Apsemo) has a standing order to constantly adjust their disaster preparedness strategy with emphasis on community-based evacuation in order to achieve the provincial government’s goal of “zero casualty” in times of disaster.