Dan Brown’s ‘gates of hell’ must be in these places 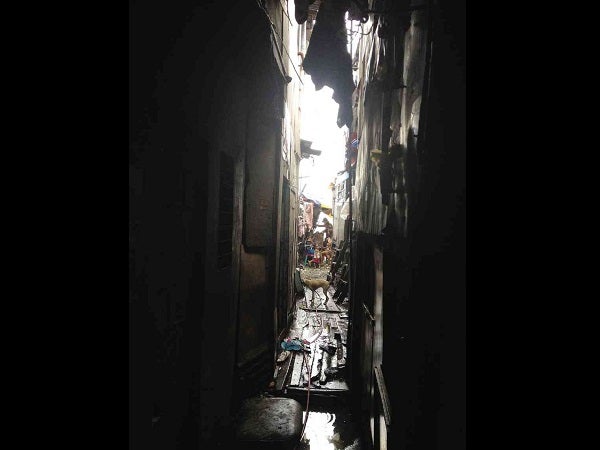 ‘HELL STREET’ “Kalye Impyerno” in Barangay San Roque in Navotas City is a narrow alley cutting through a slum area with a history of crime and violence that gave it its hellish name. NATHANIEL MELICAN

Dan Brown could be right: Metro Manila indeed has places with names that may lead the unwary to the “gates of hell.”

While many communities in this predominantly Catholic country invoke the names of saints and things holy, there are pockets with a shared history of darkness called “Kalye Impyerno” (Hell Street) in Navotas City, “Pasong Dyablo” (Devil’s Pass) in Muntinlupa City and “Pulong Dyablo” (Devil’s Island) in landlocked Antipolo City.

Their common past is not hard to guess. The more curious part is why residents, for many years, have accepted these names that can send chills down the spine as their (unofficial) addresses.

From the poet Dante to the novelist Dan Brown (whose latest book “Inferno” piqued Filipinos for describing Manila as the “gates of hell”), any writer looking for hellish, urban blight to write about could begin the search by walking through these portals.

Kalye Impyerno is an alley that cuts through a slum community in Barangay San Roque, Navotas City. To reach it, one may start from Judge A. Roldan Street, turn left to Everlasting Street, pass through a dimly-lit flea market and make a right leading to a gap between two nondescript houses.

The alley is so narrow that two men can barely pass through if they walk side by side, avoiding murky puddles along the way. Rusty roof sheets overlapping above block the path from sunlight.

Deeper into the interior, the wet, uneven pavement turns into a wooden footbridge, through rows of shanties, until finally the space opens up, quite surprisingly, to a strip of coastline facing Manila Bay. On any given day, rain or shine, this “dead end” of Kalye Impyerno gathers residents idly playing cards or just killing time.

Delfin Prudencio, 56, the administrator of Barangay San Roque, said the alley was actually called Everlasting Extension on official records, but it became Impyerno to locals sometime in the 1990s because of the brawls that often took place there.

“The younger residents started calling it by its new name whenever they were asked where they lived. Apparently, the name stuck,” said Prudencio. “The area now crossed by the alley was just a breakwater back in the 1960s. But as years went by, squatters crowded the area.”

Wacqs Bautista, a barangay tanod (village watchman), recalled how the alley became the preferred escape route of gangs and criminals.

“They used to have their hideouts there. Back in the ’90s, whenever we had to go on patrol duty, we didn’t just bring along a policeman as backup. We had an escort from the Army,” he said.

There was even a group called “Abu Sayyaf” that took refuge in the area, though it was never known whether it was just a copycat or a local cell of the terrorist group based in Mindanao.

“Every day we would hear gunshots. Once, a teenager was killed when that group went target shooting. One of the shooters thought he was already out of bullets, but when he pulled the trigger, he hit a kid standing nearby,” said another resident, who declined to be identified for security reasons.

Kalye Impyerno finally turned relatively peaceful after the arrest of six robbery suspects who went into hiding in the area in 2011, Bautista said. Barangay patrols occasionally spot teenagers taking drugs, “but there are no more organized crime groups here,” he said.

In Muntinlupa, Pasong Dyablo actually refers to a creek—now polluted—running through barangays Alabang, Ayala Alabang and Cupang, before merging with Alabang River, which in turn spills into Laguna de Bay.

None of the residents along the creek or City Hall employees can recall how the creek got its name.

But it has its own share of infamy: Pasong Dyablo was mentioned in a complaint filed in the Office of the Ombudsman in 2012 against Mayor Aldrin San Pedro and several City Hall officials.

The complainant, former bids and awards committee secretariat head Abel Sumabat, alleged that the creek was the site of a dubious riprap project approved by San Pedro. Sumabat cited 98 other “ghost projects” in his complaint, which was then dismissed by the mayor as politically motivated.

Before it was renamed Milagrosa (miraculous) a few years ago, a community in Antipolo City hardly inspired a sense of hope or salvation. Instead it evoked images of ruin and damnation.

“I remember how scared I was whenever the name came up in conversations,” said Paolo Rectra, 26. As a child, he was often warned by his parents not to stray into Pulong Dyablo.

Not even remotely resembling an island, Pulong Dyablo was actually a neighborhood that grew near Ynares Center in Barangay San Roque. Until the turn of the millennium, it was just another shantytown with dirt roads and a nasty reputation.

The place has “improved” since, with the streets now paved and more concrete homes rising, said Rectra, a San Roque resident. “It’s not that bad anymore.”

For Reuel Vidal, the city government’s information officer, “there’s really nothing special about it except for the name.”

In 2007, a GMA 7 report referred to Pulong Dyablo as “a haven of criminality and poverty.” Reporter Jiggy Manicad noted, for instance, that illegal drugs were casually being sold there in broad daylight.