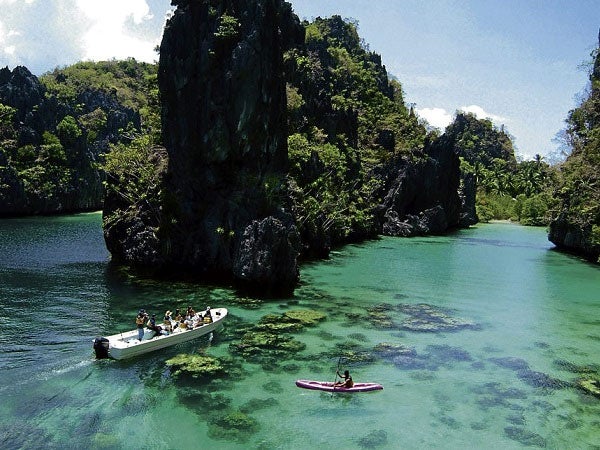 Kayaking is one of the many pleasures offered by El Nido Resorts, a cluster of four eco-resorts in Palawan, which won the prestigious Tourism for Tomorrow Award during the 13th annual World Travel and Tourism Council Global Summit in Abu Dhabi. CONTRIBUTED PHOTO

MANILA—The giant news organization CNN has included three Philippine beaches on its list of the best 100 beaches in the world.

The issuance of the list coincided with an announcent by the government that tourist arrivals in the country increased by 10 percent in the first four months of 2013.

The Atlanta-based cable news channel said Puka Beach in Boracay, El Nido in Palawan, and Palaui Island in Cagayan were among the best destinations for beach bums around the globe. It listed Palaui on No. 10, the only Southeast Asian beach in the Top 10.

“Glorious white sands meet volcanic rocks and blue-green waters topside, while coral gardens and a rich marine reserve meet divers under the surface. Palaui is all about raw beauty,” CNN said of the island off the northeastern tip of Luzon.

“Treks to get there require battling thorny grass, muddy ground and a mangrove forest…. With no resorts or hotels, Palaui has only two real options: camping under the stars or home stays,” it added.

El Nido, which supposedly inspired author Alex Garland to write the novel “The Beach,” landed on No. 14, or five notches above Maya Bay in Ko Phi Phi, Thailand, where the novel’s movie adaptation starring Leonardo DiCaprio was filmed.

“El Nido is the gateway to adventure, ‘the last frontier’ of the Philippines, as it has been dubbed,” CNN said.

And while it has received flak recently for being overcrowded and for being a disappointment for some travel writers, Boracay island, particularly Puka Beach, still made it to No. 84.

“Making a respectable claim to its ‘tropical paradise’ reputation, Boracay has powdery beaches, water sports and spas. Puka Beach is named for its Puka shells, meaning the sand here is coarse,” CNN said.

“Puka is the second-longest beach on Boracay and relatively empty most times, with no resorts and a limited number of restaurants,” it added.

International publications like Travel+Leisure Magazine and the New York Times earlier named the Philippines among the hottest tourism destinations for 2013.

On Thursday, the Department of Tourism ) said foreign visitor arrivals during the first four months of 2013 reached 1,649,458 million, or a 10.12 percent increase from the same period in 2012.

“The first four months represent 30 percent of the target arrivals for 2013, with the month of January yielding the largest volume of 436,079 visitors and February generating the highest growth of 15.52 percent,” the DOT said.

For the first four months of the year, South Korea contributed the largest arrivals with 406,595 visitors, keeping its undisputed pole position with the biggest market share of 24.65 percent of total inbound traffic and a double-digit growth of 23.08 percent.

The DOT said the United States came in as the second biggest source market with 246,011 visitors or a share of 14.91 percent.

Arrivals from Taiwan declined by 8.3 percent with 68,654 visitors and this was before public anger in Taiwan over the killing of a Taiwanese fisherman by members of the Philippine Coast Guard.

“This growth is an affirmation of our various marketing and destination development activities, strengthened by partnerships with the various stakeholders. While the upsurge may primarily be attributed to the summer season, it is also a clear indication that the nation has galvanized its reputation as an attractive destination,” said Tourism Secretary Ramon R. Jimenez, Jr.

“We have been seeing a sustainable increase in arrivals since last year. This building enthusiasm for the Philippines, aided by our government’s good governance agenda, gives us the confidence to achieve our target of 10 million tourist arrivals by 2016,” he added.