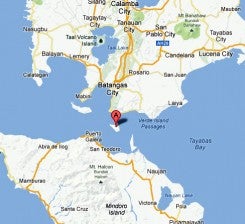 BATANGAS CITY, Philippines- An infestation of the poisonous and destructive crown-of-thorns starfish (Acanthaster planci), or COTS, has been reported off a coastal village here, threatening corals in the waters that form part of the Isla Verde Passage.

Jacob Meimban Jr., executive director of the Protected Areas and Wildlife Bureau-Coastal and Marine Management Office (PAWB-CMMO) here, said they discovered and declared a COTS infestation in the waters off Barangay (village) Pagkilatan, a 10-square kilometer village located along the Verde Island Passage, which has been declared the center of marine biodiversity in the world.

The crown-of-thorns starfish is a predator on coral reefs. It belongs to the subclass Asteroida that includes all starfish. A nocturnal marine species, it feeds by forcing its stomach out through its mouth and turning it inside out, in a process called eversion. Most COTs prefer to feast on fast-growing corals such as Acropora spp. The starfish locates itself on the coral polyps, everts its stomach, spreads it over the coral, secretes digestive enzymes onto the coral tissue and then absorbs the digested tissue as it withdraws its stomach.

To address the alarming infestation in the area, the PAWB-CMMO organized on Tuesday a group of about 30 diving enthusiasts that included celebrity couple Luis Manzano and Jennelyn Mercado, to manually remove the thorny starfish one by one from the corals.

Manzano, son of Batangas Gov. Vilma Santos-Recto, and Mercado were earlier conferred the title of Ambassadors for Sustainable Coral Reef Ecosystems Management Program by the PAWB-CMMO, he said.

In April, they were able to remove 100 COTS and on Tuesday, they collected 135 with average diameter of 12 inches, Meimban said.

The 30 divers used tongs in removing the COTS from the corals, according to Meimban.

“Kailangan ipitin sila at hindi dapat sundutin kasi lalo silang dadami, kakalat yung toxins at eggs galing sa katawan nila, at ibaon sa hukay na may lalim na six feet (The COTS should be clamped with the tongs–not poked or pricked because doing so will cause their toxin and eggs to spread–and then buried in a hole six feet deep),” Meimban said.

He said a COTS outbreak is not visible on the surface since they are attached to the corals and could only be seen 20 feet deep into the water.

A COTS is covered with venomous, sharp spines on its multiple arms, that radiate to form like a crown. It is one of the largest species of starfish and can reach up to 20 inches in diameter.

COTs are also dangerous to humans. Contact with its long spines causes a stinging pain, bleeding, nausea and swelling of the area which may last for a week. Spines that break off and become embedded in skin require minor surgery to remove, he added.

According to Meimban, COTS can cause widespread destruction on coral reefs, which serve as habitats and nurseries of many marine species. COTS grow and multiply fast as a result of climate change, over-fishing and pollution. They multiply in a matter of weeks because of the hot temperature, he added.

Read Next
Drilon brushes off rumors on Kris Aquino’s support for Alan Cayetano
EDITORS' PICK
Harnessing technology for quality education
Duterte: When I said I will fight drugs in 6 months, I thought it was like in Davao
Hidilyn Diaz wins weightlifting gold in Tokyo Olympics
Duterte warns of possible lockdown if ‘more aggressive’ Delta variant spreads
Tips for a cheerful life
Connect to PH’s fastest network with new Signature Plan Lite at only P599 per month
MOST READ
Hidilyn Diaz wins weightlifting gold in Tokyo Olympics
Go to war with China over West PH Sea? It will be a ‘massacre’, says Duterte
Hidilyn shoots not only for gold but also for permanent place in PH sports history
Duterte acclaims Sotto: ‘He can become a good vice president’
Don't miss out on the latest news and information.