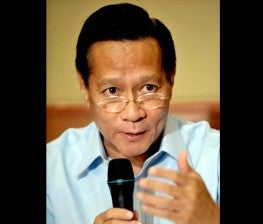 MANILA, Philippines – There was a transfer of P530 million from the Overseas Workers’ Welfare Administration (OWWA) to the Philippine Health Insurance Corp. (Philhealth) and two checks we

“On my hands now are the two checks that came into PhilHealth’s possession from [the] Overseas Workers Welfare Administration [OWWA] Medicare,” Francisco Duque III, who also headed P

hilhealth at that time, said in an interview over Radyo Inquirer.

Duque said that the P

The money was us

ed by PhilHealth to support the medical needs of Overseas Filipino Workers and their dependents, said Duque who, along with Arroyo, former foreign affairs secretary

Alberto Romulo, and then OWWA administrator Virgilio Angelo is facing plunder charges before the Department of Justice.

Former solicitor general Francisco Chavez filed the complaint before the DoJ Tuesday, alleging that Arroyo, now a Pampanga representative, and her three officials misused the OWWA funds from March 2003 to February 2004.

d. I have complete records, receipts and other documents to prove I am not guilty of what he [Chavez] is accusing me.” Duque said.

In a separate interview, Chavez said the two checks could have been payment given by Arroyo for the “services” rendered by Duque during the 2004 presidential elections.

He said that as early as 2002, Duque had written Arroyo a proposal to transfer funds from OWWA to Philhealth and that this shift would have a significant bearing on the 2004 elections, which Arroyo eventually won.

“I will be available to expla

in in greater detail the far-reaching political implications of the transfer.” Chavez said.

“As soon as I know who among the OWWA board members took part on the approval of the fund transfer, a plunder case will also be waiting for them.” Chavez added.

For the full report, listen to DZIQ 990AM.