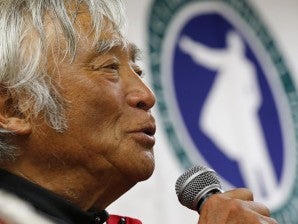 Yuichiro Miura, an 80-year-old Japanese mountaineer who became the oldest person to reach the top of Mount Everest last Thursday, speaks during a press conference at CLARK Memorial International High School in Tokyo, Wednesday, May 29, 2013. Miura launched a high-altitude salvo at his Nepalese rival Wednesday, suggesting his fellow octogenarian may have got nowhere near the roof of the world. AP/SHIZUO KAMBAYASHI

TOKYO—The oldest man ever to conquer Everest launched a high-altitude salvo at his Nepalese rival Wednesday, suggesting his fellow octogenarian may have got nowhere near the roof of the world.

Japanese adventurer Yuichiro Miura, 80, set foot on the 8,848 metre (29,028-foot) summit last week to claim back a Guinness World Record snatched from him in 2008 by Min Bahadur Sherchan, who was 76 at the time.

As news filtered through to Tokyo on Wednesday that Sherchan had abandoned his bid to scale the world’s highest peak at the age of 81, the feisty Miura said there was no solid evidence he summited in 2008 either.

“Nobody knows whether or not to believe that he climbed to the top,” Miura told a news conference hours after returning home from his closely followed third conquest of Everest.

“(The rumor) is particularly so among top-rate European mountaineers who know all about the mountain,” said the stout 80-year-old, a professional skier.

Sherchan’s supporters told AFP in Nepal a delay in getting a government permit for the climb had scuppered his 2013 attempt.

Nanibabu Dahal, an aide to the Nepalese adventurer, said the Nepal government, which had pledged one million rupees ($11,500) for the attempt, also delayed delivering the money, which meant Sherchan missed his best chance.

The sky-high ding dong came as climbers the world over celebrated the 60th anniversary of the first ascent of the mountain by now-legendary mountaineers Edmund Hillary and Tenzing Norgay.

It also came weeks after a fist-fight broke out between European climbers and sherpas as groups jostled for their chance to push on up the final leg of the mountain.

Miura first reached the summit in 2003 at the sprightly age of 70 to claim the title of the world’s oldest Everest summiteer.

His record was broken in 2007 when fellow Japanese Katsusuke Yanagisawa reached the top at the age of 71, but he claimed it back the following year at the age of 75.

However, his 2008 record was retroactively rewritten in 2009 when Guinness recognized Sherchan’s claim that he scaled Everest a day earlier than Miura did when he was 76.

Miura’s daughter Emili, who served as director of her father’s support office in Tokyo, said there needed to be real evidence of a successful climb if it was to be believed.

“To prove that one has really reached the summit, it is necessary to keep a solid record as we did this time,” she said.

“I don’t think that a certificate of climbing (issued by the Nepali government) is the only proof of having climbed Everest. Photographs and others evidence are.”

Miura said Sherchan’s belated attempt this time around came after his own party was already well on its way, with the Nepalese falling sick after flying into Everest’s base camp.

“He could not even get to the point where you have to put on climbing irons,” Miura said.

“If he was really serious about getting to the top he would have undergone rounds of altitude acclimatization. That’s fundamental.”

Miura’s party, which included his 43-year-old son Gouta, 43, two other Japanese and six sherpas reached the summit on May 23 to great fanfare in Japan.

Media in the rapidly aging nation provided a daily diet of pictures, videos and testimony from the climbers that had been put on a carefully maintained website.

Miura, who underwent heart surgery to correct recurring arrhythmia last November and again in January, said he was now setting his sights on skiing down the 8,188-meter Cho Oyu in the Himalayas, the world’s sixth-highest peak.

“I just haven’t decided when,” he said.—Shigemi Sato