Mother of newborn in sewer was present for rescue 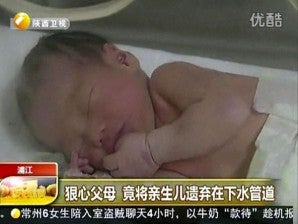 In this still image made from video from May 25, 2013, a baby who was rescued after being trapped in a sewage pipe just below a squat toilet in a public building, lies on a bed at a hospital in Jinhua city, eastern China. A 22-year-old single woman who alerted the authorities of a newborn boy trapped in a sewer in eastern China has admitted that she was the mother, but had refused to come forward because she could not support the child. AP photo

BEIJING — The mother of the Chinese newborn trapped in a sewer pipe in a stunning ordeal caught on video had raised the initial alarm and was present for the entire two-hour rescue but did not admit giving birth until confronted by police, reports said Wednesday.

The woman, whose name was not revealed in state media reports, confessed to police when they asked her to undergo a medical checkup.

The woman told police she could not afford an abortion and secretly delivered the child Saturday afternoon in the toilet. She said she tried to catch the baby but he slipped into the sewer line and that she alerted her landlord of the trapped baby after she could not pull the child out, the state-run, Jinhua-based Zhezhong News said.

Video of the rescue of Baby No. 59 — so named because of his incubator number in the hospital — was shown on Chinese news programs and websites starting late Monday and picked up worldwide, prompting both horror and an outpouring of charity on behalf of the newborn. The mother’s reported confession raises questions about whether she intended to abandon the baby, while suggesting that she was desperate and did not know what to do.

Zhezhong News said the woman is a high school graduate who works at a restaurant in the Zhejiang province city of Jinhua. She said she became pregnant after a one-night stand with a man who later denied any responsibility. The woman did not reveal the pregnancy to her parents. She also said she wanted to raise the child but had no idea how to do it, according to local reports.

Firefighters were called to the residential building in the Pujiang area of Jinhua to rescue the baby, which was trapped in the L-joint of a sewage pipe just below a squat toilet in one of the building’s public restrooms.

In the video, officials were shown removing the pipe from a ceiling that apparently was just below the restroom and then, at the hospital, using pliers and saws to gently pull apart the pipe, which was about 10 centimeters (about 3 inches) in diameter.

The baby, who weighed 2.8 kilograms (6 pounds, 2.8 ounces), had a low heart rate and some minor abrasions on his head and limbs, but was mostly unhurt, according to local reports. The placenta was still attached.

News of the baby’s ordeal was met with horror and pity by bloggers on Chinese sites. Most speculated that the child had been dumped by his parents down the toilet. The rescue prompted an outpouring from strangers who came to the hospital with diapers, baby clothes, powdered milk and offers to adopt him.

Dushikuaibao said the mother was present throughout the entire rescue and expressed her concern for the child, thought that didn’t initially rouse suspicion of the police.

Police initially said they were treating the case of as possible attempted homicide, but it was not immediately clear whether the mother would face criminal charges.

Local police refused to comment, saying the case is under further investigation.

In China, unwanted pregnancies have been on the rise because of a lack of sex education and an increasingly lax attitude toward sex. Young men and women often are engaged in unprotected sex, and abortions have become increasingly common, with abortion services widely available.

Sociologist Li Yinhe said more than 70 percent of China’s young adults have had premarital sex, but that Chinese schools typically shy away from sex education and teaching about contraception because teachers don’t want to appear to condone premarital sex.

“The public also is very ambiguous over whether you are committing a murder when you kill an infant or abandon it,” Li said.

The landlord of the building told local media earlier in the week that there were no signs that the birth took place in the restroom and she had not been aware of any recent pregnancies among her tenants.

The baby’s mother told police she cleaned up the scene in the toilet after the delivery and that she had managed to hide her pregnancy by wearing loose clothes and tightly wrapping her abdomen, Zhezhong News said.