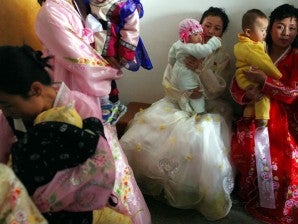 In this Monday, May 20, 2013 photo, North Korean nurses say goodbye to representatives from foreign humanitarian agencies after a U.N. and North Korean government program to give vitamin supplements and deworming pills to children at a nursery school in Pyongyang, North Korea on Child Health Day. AP

PYONGYANG, North Korea— New international sanctions aimed at thwarting North Korea’s nuclear weapons program are having unintended consequences: halting money transfers by foreign humanitarian groups working to help those most in need and forcing some agencies to carry suitcases of cash in from outside.

At the same time, some restrictions are meant to sting the country’s elite by crippling the import of luxury goods, such as yachts, fancy cars and jewelry. But they do not appear to be stopping the well-heeled from living large in the capital Pyongyang.

Much of the aid group difficulties are linked to the state-run Bank of China’s decision earlier this month to follow Washington’s lead and sever ties with the North’s Foreign Trade Bank, the main money transfer route for most foreign organizations, U.N. agencies and embassies in Pyongyang. With that line cut, aid workers in North Korea say they are left with few other options to receive foreign currency for operating expenses including rent, bills and salaries for local staff.

The sanctions are not supposed to affect humanitarian aid, but six Pyongyang-based aid organizations headquartered in Europe issued a communique earlier this month spelling out their frustrations and calling the difficulties in transferring money to North Korea a “big problem.” They warned that they may be forced to suspend their operations if they cannot find ways to access cash. A handful of American non-governmental organizations also work in North Korea, but they cycle in and out and do not maintain a permanent presence.

Gerhard Uhrmacher, program manager for German humanitarian aid organization Welthungerhilfe, said when recent bank transfers failed, he managed to keep their projects running by routing 500,000 euros ($643,000) to Chinese or North Korean accounts in China to pay for building supplies and other goods.

He said Welthungerhilfe, which signed the communique and works on agriculture and rural development projects in North Korea, has some reserves in Pyongyang but must also resort to carrying cash into the country by hand.

“It doesn’t give a good impression. We’re trying to be transparent, to be open to all sides and now we’re more or less forced to do something that doesn’t really look very proper because people who carry a lot of cash are somehow suspect,” said Uhrmacher who is based in Germany but has worked in North Korea for the past 10 years.

“Whatever you’re doing, everybody looks at you very closely,” he said. “That’s why we don’t like it because bank accounts are proper. Everybody can have a look at it and everybody can control it. Now we are forced to do something else.”

Some analysts said the aid groups were simply “collateral damage” and that they will find a way to work around the sanctions as they have been forced to do in other countries. Others said the risk of some humanitarian organizations being forced to potentially pull out of the country would only end up hurting the poorest North Koreans. The humanitarian groups work on a range of issues from food security to improving health and assisting with disabilities.

Aid groups “may not provide as much support as governments, but they have the ability to reach the deep corners of the impoverished North where people are in most need,” said Woo Seongji, a professor of international relations at Kyung Hee University in Seoul, South Korea. “Their help is both symbolic and substantial. It reaches kids, hospitals and food shelters that outside governments may not be able to support consistently because of political considerations.”

The latest sanctions have added challenges to the already difficult system of getting money into North Korea since ally China has restrictions on how much foreign currency can be legally taken beyond its borders.

Sanctions and trade embargoes have long been used by the international community to put an economic squeeze on troublesome regimes from Iraq and Myanmar to Cuba. But they are a blunt tool that can unintentionally add to the suffering of people living under oppressive rule by hindering development and the delivery of aid.

In North Korea’s case, the sanctions are meant to stop the financing and smuggling of cash that could help its nuclear and missile programs. They also aim to send a message to the country’s elite by crushing the import of luxury goods.

Yet last week at the newly opened six-story Haedanghwa Service Complex in Pyongyang, well-dressed North Koreans chatted on mobile phones and browsed in a high-end boutique that sold everything from fine Italian suits and Dior makeup to glass showcases glittering with diamonds and gold.

The opulent center boasted 17 different themed dining rooms and cavernous banquet halls, some with their own bathrooms and round tables big enough to seat 30 people. Upstairs, young couples played pool, lounged in the sauna and munched on sushi while sipping cans of Coke and beer. Others splashed in a heated indoor swimming pool replete with waterfalls or worked out at a fitness center filled with state-of-the-art equipment. Downstairs at a popular restaurant, a chef delighted guests by cooking on a grill in front of them — at a cost of $50 a plate, not including drinks.

Meanwhile, at the airport, a Toshiba 42-inch flatscreen TV slowly made loops on the baggage carousel. All proof that high-end merchandise is still making its way to the upper class in an impoverished country where two-thirds of its 24 million people don’t have enough to eat.

Uhrmacher said that despite repeated European Union vows that sanctions will not affect humanitarian aid, the pinch is being felt by all the organizations working in North Korea. The EU has not sanctioned the Foreign Trade Bank, but he said due to U.S. political pressure and fears of becoming entangled in controversy, European banks do not want to be associated with it. Bank of China had typically been used as a channel to route money to the aid groups’ North Korean accounts.

Most foreign embassies, NGOs and businesses have accounts at FTB or the Daedong Credit Bank. Daedong was named in an earlier round of U.S. sanctions, leading many embassies and NGOs to open accounts at the FTB.

“We are concerned regarding possible unintended effects of certain sanctions, in particular with regard to humanitarian assistance, and stress the need to overcome these unintended effects,” said Maja Kocijancic, spokeswoman for EU foreign policy head Catherine Ashton.

The U.S. Treasury Department hit the North Korean bank with sanctions in March, effectively cutting it off from the U.S. financial system after accusing the country’s main foreign exchange institution of funding Pyongyang’s missile and nuclear programs. Washington pressured Beijing to also impose restrictions on the bank a month after new leader Kim Jong Un angered his biggest economic supporter by conducting an underground nuclear test.

The U.N. responded to that move by slapping Pyongyang with its toughest-ever sanctions. Tensions then boiled and North Korea spewed threats for weeks, including plans to launch nuclear strikes against the U.S. and its allies. The mood has since cooled, with the North sending a high-level envoy to Beijing last week to deliver a message that they were willing to take steps toward rejoining stalled nuclear disarmament talks.

Embassies and U.N. agencies are also affected by the banking transfer issues, but several officials refused to comment due to the sensitivity of the issue. However, the U.N. in Pyongyang said last month that the sanctions were hurting its ability to raise funds, resulting in a shortage of drugs and vaccines. The World Health Organization also said it’s harder to import equipment and medicine because everyone has become over cautious at all levels before clearing materials.

The World Food Program said it has not yet been affected by the banking problems. It only needs limited funding within North Korea as financial transactions for its food aid are completed outside the country.

“To date, WFP has continued to use its normal channels to remit funds to our DPRK (office) successfully,” said Marcus Prior, a spokesman in Bangkok, referring to North Korea by the initials of its official name. “We are aware that sanctions on DPRK may be tightening, and so we are exploring all available alternatives to ensure that our operation is properly supported.”