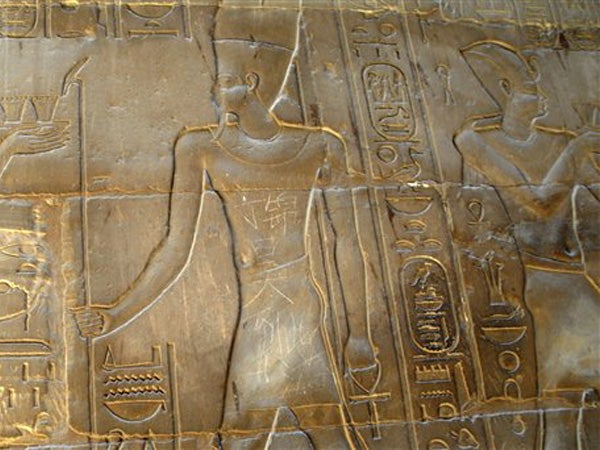 The Chinese words “Ding Jinhao visited here” is seen on bas-relief in the 3,500-year-old Luxor temple in Luxor, Egypt. A Chinese teenager who defaced the ancient temple in Egypt with graffiti has come under fire at home where his vandalism prompted public fretting about how to cultivate a good image overseas as more newly affluent Chinese travel abroad. AP

BEIJING—A Chinese teenager who defaced an ancient temple in Egypt with graffiti has come under fire at home where his vandalism prompted public fretting about how to cultivate a good image overseas as more newly affluent Chinese travel abroad.

The teen scratched “Ding Jinhao visited here” in Chinese on a temple wall in the ancient city Luxor, and the incident came to light when another Chinese tourist posted a photo of it on a popular microblog with the comment: “My saddest moment in Egypt. Ashamed and unable to show my face.”

The photo quickly caught the attention of the Chinese public, attracting thousands of comments, and someone was able to identify the person responsible for the graffiti as 15-year-old Ding Jinhao from the eastern city of Nanjing. Many criticized Ding’s act as an embarrassment to the country.

“Why there are so many citizens who go abroad and humiliate us? How many generations will it take to change this kind of behavior?” Xuan Kejiong, a prominent journalist with Shanghai Television, wrote on his microblog.

The sentiment was echoed by the mouthpiece of the ruling Communist Party, the People’s Daily newspaper.

“Nowadays, people in China no longer want for food and clothing, and even in the luxury shops abroad, there are advertisement posters in Chinese,” the paper wrote in a commentary. “But many people also feel as though their ‘hands are full but hearts are empty.’ In the process of modernization, how have the people come to lack modern manners and consciousness?”

The outcry prompted Ding’s parents to publicly apologize. In an interview with a Nanjing newspaper, Ding’s father said “the child has committed a mistake and the main responsibility falls on the adults. It was because we did not supervise him well, and have not taught him well.”

The soul searching comes as Chinese tourism overseas has seen an explosion in growth over the past decade, fueled by rising incomes and the relaxation of government restrictions on citizens’ ability to travel abroad.

But Chinese travelers, many of whom join tour groups, are frequently criticized for rude behavior. Deputy Premier Wang Yang earlier this month during the passage of a tourism law urged Chinese travelers to mind their manners.

“They make a racket in public places, carve words at scenic spots, cross the road when the light is red, spit, and do other uncivilized things,” Wang was quoted as saying. “This is detrimental to the image of the country’s people and leaves a bad impression.”