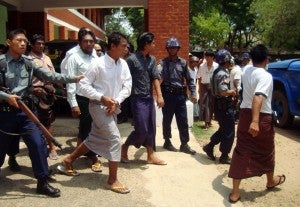 A Muslim man is escorted by police officers following a trial at a township court in Meikhtila, central Myanmar on May 21, 2013. Houses and mosques were set ablaze by mobs in a town in eastern Myanmar after a Buddhist woman was allegedly “torched” by a Muslim man, authorities said Tuesday, May 28, 2013, in a fresh bout of religious violence. AP PHOTO/KHIN MAUNG WIN

YANGON—Houses and mosques were set ablaze by mobs in a town in eastern Myanmar after a Buddhist woman was allegedly “torched” by a Muslim man, authorities said Tuesday, in a fresh bout of religious violence.

An ethnic Shan-Muslim man was arrested after he “torched” a woman selling petrol, a police officer in the Shan State capital of Lashio told AFP under the condition of anonymity.

A town official confirmed the arrest of the Muslim man who he said had “torched a woman with petrol,”

A curfew was imposed late Tuesday to disperse angry mobs of local people—including Buddhist monks—who had “destroyed some houses and mosques,” the official added, also declining to be named.

“Fires have been put out at some places in the town… the situation is under control now,” the official said, adding soldiers have been deployed to enforce the curfew.

The woman, an ethnic Shan-Buddhist, was taken to hospital, but neither official could give details of her condition.

Residents in Lashio, around 200 kilometers (120 miles) northeast of Mandalay, said Muslim shops and even a school had been set alight as furious mobs demanded the police hand the suspect over to them.

“I can still see smoke and flames coming out from a Muslim school… it appears the school has been burnt down,” one resident told AFP by telephone, confirming the curfew.

“We do not know exactly what is going on.”

The mainly Buddhist Shan are the country’s second-biggest ethnic group, accounting for about nine percent of the population.

The government says at least 44 people were killed and thousands left homeless after a flare-up of religious violence in March, which was apparently triggered by a quarrel in a gold shop.

Tensions have simmered since, with hardline Buddhists—including monks—urging a boycott of Muslim shops and deploying fierce anti-Muslim rhetoric.

Three Muslims, including the gold shop owner, were jailed for 14 years in April for assaulting a Buddhist customer, while this month seven more received sentences of up to 28 years in connection with the violence.

So far no Buddhists have been convicted over the unrest, which began in the central town of Meiktila, but officials have insisted both sides are being treated equally.

Last year up to 140,000 people—mainly Rohingya Muslims—were displaced in two waves of sectarian unrest between Buddhists and Muslims in western Rakhine.

Human Rights Watch has accused Myanmar’s authorities of being a party to ethnic cleansing over the violence, which killed some 200 people and saw mobs set fire to whole villages.

Myanmar’s reformist President Thein Sein this month vowed to uphold Rohingya rights, while opposition leader Aung San Suu Kyi on Monday made a rare intervention in the incendiary issue to condemn a ban on Rohingya having more than two children in strife-torn Rakhine.