One of the smartest gifts you can give a budding engineer or techie is a robotics kit. Building and programming little machines so they will do what you want them to do can be such a rewarding experience. Just ask Lucas Ramos.

Ramos so enjoyed tinkering with the Lego Mindstorm NXT robotics system that it led to his teaming up with classmates at International School (IS) Manila and winning at robotics competitions.

When last year he was exposed to “more complex robotics with metal parts” in the VEX robotics design system, he realized he had one too many robotics kits at home that he hardly touched anymore. What to do with them? 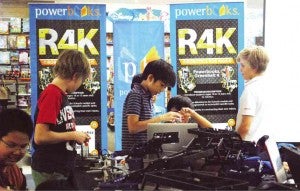 AT POWERBOOKS, a multinational class of young robotics enthusiasts

This summer, Ramos found a use for the expensive educational toys that he had outgrown by giving introductory robotics lessons to other kids.

For two hours every Sunday in April through mid-May, he ran the R4K workshop on the second floor of the family-owned Powerbooks at Greenbelt 4 in Makati City. He gave the 19 kids who signed up for R4K a hands-on experience with the same fascinating gadgetry that had him hooked in his younger years.

“It was nice that we could use the kits and the kids didn’t have to buy,” said Ramos, who is turning 16 in June and Grade 11 in August. 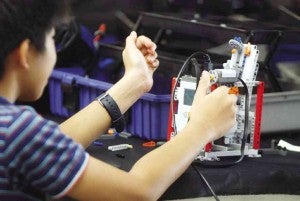 WILL jack pop out of the base?

“It’s hard for children to find other children who like robotics,” he said. “So I thought it might help if there was one place where they could come to do this kind of thing.”

The first four R4K sessions were simple.  “I did it one step at a time,” said Ramos. Each week, he added more parts—other blocks, a motor here, a sensor there—and he always gave the kids his good-natured one-on-one attention.

He said a kid could come to his workshop with no prior knowledge and be able to pick up robotics. “There’s no math or calculation required, ” he added.

Dexterity and fine motor skills are needed in robotics, though because some of the parts in the kit are very small and the kids sometimes have to attach one part to another. That was why 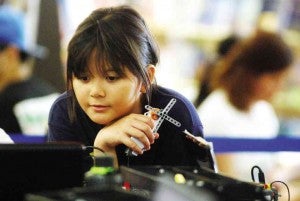 ROBOTICS too for Arianna Quintal, not just dolls

R4K participants had to be at least 8 years old.

In the second to the last session, Ramos asked the kids to build a jack-in-the-box after dividing the class into eight partners. Each set of kids was given access to a kit and a laptop.

Before you think robots are eye candy only to boys, four girls did join Ramos’ short course. They weren’t a nerdy, brainy bunch; they rather looked like girls who just wanted to have fun. One was wearing a tiara—no kidding—while working intently on her robot.

Liam Ramos in his brother’s class.

“The girls did fine. One of them was quite musical and built a whole song into her jack-in-the-box. That involved imagination,” said Ramos.  Besides exciting creativity in kids, robotics also helps develop problem-solving skills.

He enjoyed himself so much, Ramos said he’d most probably do R4K again.

When asked why and reminded that teens like him usually would rather spend their time hanging out with friends, he smiled a disarming, braced smile.

“I’m doing this because I think it’s fun,” he said. “And because it’s a chance to introduce these kids to robotics. I really believe in robotics.”

Lucky for the workshop kids, as young as Ramos is, he has the experience to back him up. In 2010, Ramos and a classmate won the bronze at the World Robotics Olympiad (WRO), which was held here. In ninth grade, he was one of three boys who bagged the top prize in the Philippine Robotics Olympiad, whose win qualified the team to compete at the WRO in Abu Dhabi. In November last year, Ramos and his IS team placed second in Taiwan.

Quite obviously, Lucas Ramos is a high-achiever, thanks to parents Ivan and Sheila Ramos, who always encouraged him to find his passion and gave him the support to pursue it. He not only does well academically, he also represents his school at chess and golf tournaments (he recently placed second in golf at the Interscholastic Association of Southeast Asian Schools, which was held in Kuala Lumpur).

He is a hardworking young man who knows what he wants and how to get there. He is bent on taking up computer engineering in college. “I enjoy programming,” he said, adding rather sheepishly that he had his sights set on Stanford University.

“Goodbye, Coach,” one of the boys called out as he was leaving the class. Ramos cracked a smile and said goodbye back.

Coach. The word sure had a nice ring to it.